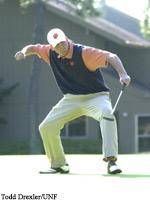 Clemson, SC-Larry Penley’s #1 ranked Clemson golf team will travel to the Old North State Club at New London, NC April 18-20 to compete in the 50th annual Atlantic Coast Conference Golf Tournament. The Tigers have won the event seven times in history, including a co-championship in 1990. Clemson was victorious as recently as 2000, an event that was also held at the Old North State Club.

This promises to be a tournament that will have an impact on the national polls, as the Tigers are ranked first in the nation in the latest Golf Coaches Association poll and the Golfweek/Sagarin poll. ACC schools Wake Forest (2nd), North Carolina (10th), Georgia Tech (15), and NC State (16) are also top 20 teams according to the latest Golfweek/Sagarin rankings through tournaments of April 13.

Duncan finished 35th as a sophomore at the ACC Tournament and 11th last year at the Old North State Club with a 212 total. He has a 74.09 stroke average this year, but is coming off a one-under-par tournament performance at the Augusta State Invitational. Hendrix was also in the top 15 a year ago at the ACC Tournament with a 214 score, including a second round 69. He has a 71.54 stroke average this year, third best on the team and 28th in the nation. He is ranked 14th in the nation according to the Sagarin rankings.

Ferguson will be in his first ACC Tournament, but the sophomore from Seneca is a veteran of 15 tournaments in his young Clemson career. His 71.27 stroke average is second best on the Clemson team and 20th in the nation. He is ranked eighth in the nation in the latest Golfweek/Sagarin ranking.

Clemson has won three events and finished in the top three in every tournament this year. The Tigers won the Topy Cup in Japan, the Carpet Classic in Dalton, GA and the Jerry Pate Intercollegiate in Birmingham, AL this past fall. Clemson has finished second in four of the five tournaments this spring, plus gained a third place finish at the Las Vegas Invitational.

Clemson has a streak of 14 straight third-place or better finishes over the last two years. This is the longest streak of its kind in Clemson history. The previous record was just five consecutive tournaments. The last time Clemson failed to finish in the top three was a sixth-place finish at the 2002 Chris Schenkel Invitational in Statesboro, GA in March of 2002.