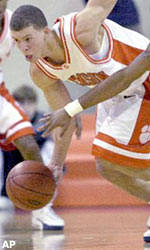 Young Tigers Are Making An Impression On The League

Both are among the league leaders in other areas as well. Stockman stands eighth in the league in three-point goal percentage and is10th in three-point goals per game. He now has 51 for the season, tying Andrius Jurkunas for the Clemson freshman record. Jurkunas had 51 in 1995-95. Hobbs stands fourth in the ACC in rebounds in league games and is eighth in overall games. He is the only freshman in the ACC shooting at least 50 percent from the field and 70 percent from the foul line.

Clemson also has received a strong contribution by Dwon Clifton. The rookie from Louisburg, NC has started every ACC game this year, something only Will Solomon has also done. He is averaging 4.2 points per game overall, but is scoring at a 6.0 points per game figure in league contests. He has made 42 percent of his three-point goals in league play.