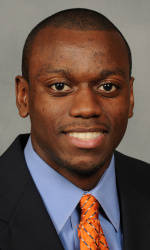 CLEMSON, SC – Clemson senior Andre Young was one of 60 players included on the 2012 Bob Cousy Award Watch List released Monday. The honor is presented annually to the nation’s top collegiate point guard. Last season, Connecticut’s Kemba Walker was the recipient of the award.

Through games of Sunday, Dec. 18, Young actually leads the NCAA with a 4.4 assist-to-turnover ratio. He has 31 assists and only seven turnovers in 34 minutes per game for the 5-4 Tigers. Young is also Clemson’s leading scorer at 14.6 points per game. He is coming off a 15-point outing on Saturday against Winthrop.

Young has scored 942 points in his career and is first among active ACC players with 147 steals and third with 276 assists. He needs just six made three-point goals to reach 200 for his career, which would make him only the sixth player in Clemson history to accomplish such a feat. Young is also third in Clemson history with a career 2.14 assist-to-turnover ratio.