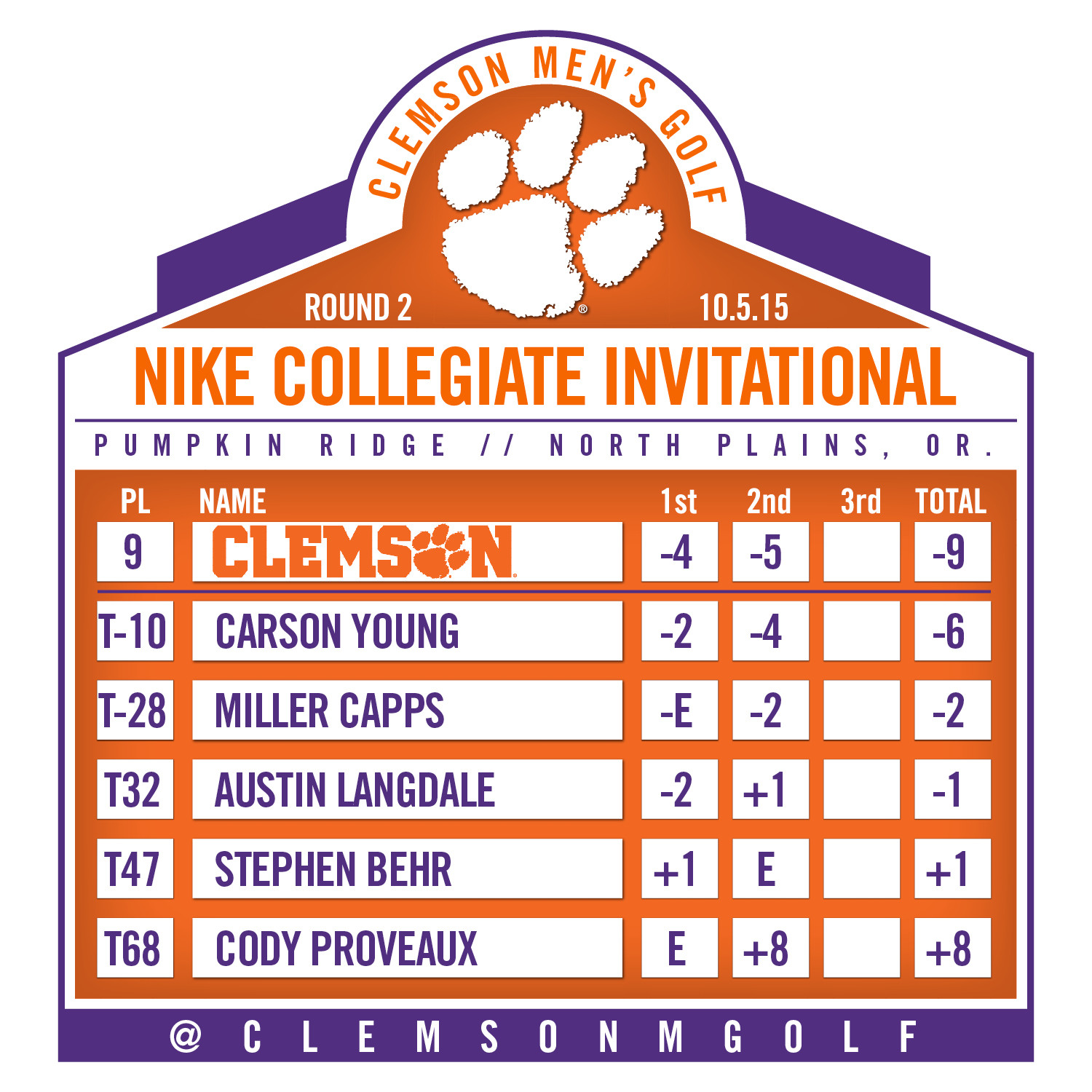 Young in Top 10 Entering Final Round at Nike Collegiate

Clemson, S.C.—Carson Young fired a season best four-under par 68 to lead Clemson to a five-under par team score in the second round of the Nike Golf Collegiate Invitational at the Pumpkin Ridge Witch Hollow Course in North Plains, Ore, on Monday.

Clemson is in ninth place in the 15-team event that includes 11 of the top 25 teams in the nation.  The final round of the three-day 54-hole tournament will be contested on Tuesday.  Wake Forest leads the field with a 26-under par score of 546.  Southern California is second at 548.  Clemson stands ninth with a nine under par score of 563, just one shot behind Oklahoma.   Clemson will play with Oklahoma and TCU in the final round on Tuesday.

Young had six birdies and played the final 15 holes in six-under-par on Monday.  It was his top round of the year and just one shot off his career best 67 at a tournament in Hawaii last year.  The junior finished with birdies on the 17th and 18th holes to enter the top 10 in the individual race in a field that is among the best in college golf.

Young’s round included a four-under-par 32 on the back side.  For the first 36 holes he has played the par three holes in two-under-par, tied for the best in the field and his 11 birdies rank fifth.

Miller Capps shot a 70 on Monday that included a three-under-par 33 on the front side.  He played the first 14 holes in four-under-par, but made bogeys on the 16th and 17th holes.  Capps is at 141 for the first two rounds, tied for 28th place.

Stephen Behr was a third Tiger to score par or better  on the par 72 Witch Hollow Course on Monday.  The graduate from Florence, S.C. had four birdies and four bogeys and stands at 144 after two rounds, tied for 47th place.

Austin Langdale, who had a 69 in the first round, struggled on the front side with a four over par 40. But the junior came back strong with a 33 on the back and finished with a one over par 73.  He has a 142 total through two rounds, good enough for a tie for 35th.

Cody Proveaux shot an even par 71 in the first round, but had an 80 in the second round and his score did not count towards the team score of 283 on Monday