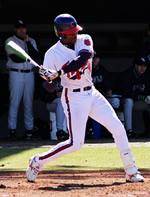 Georgia Tech finished off the series sweep with an 8-4 victory over #20 Clemson Sunday in front of a season-high 3,472 fans at Russ Chandler Stadium. With the win, the #15 Yellow Jackets upped their overall and ACC winning streaks to 13 games. Georgia Tech improved to 34-17 overall and 15-5 in ACC play. The Tigers fell to 32-21 overall and 12-9 in the ACC. The sweep marked the first time in history that Clemson suffered two, three-game series sweeps in the ACC in a single season, as Virginia also won all three games from the Tigers at Charlottesville in April.

Senior righthander Brian Burks (6-5), who started in his final regular-season home game, allowed three runs on eight hits in 6.0 innings pitched to earn the win. He along with relievers Aaron Walker and Nick Wagner combined to limit Clemson to no hits in seven at-bats with runners in scoring position. Tiger starter Tyler Lumsden (3-3) suffered the loss. Four of the eight runs allowed by the Tigers were unearned, as two costly errors proved to be the difference in the final score.

In the three-game series, Clemson had just one run-scoring hit with runners in scoring position in 26 at-bats. The Tigers hit .161 with two outs compared to the Yellow Jackets’ .333 average in that situation as well. Georgia Tech also committed just two errors in the series, while Clemson committed nine errors.

The Tigers jumped out to a 1-0 lead in the first inning. Travis Storrer grounded a one-out single up the middle and Kris Harvey followed with an RBI double to right-center, as Storrer just be the relay throw to home plate.

The lead was short-lived, as Georgia Tech came right back and scored four runs in the bottom of the first inning thanks to just one hit, sloppy Tiger defense, and control problems on the mound. Eric Patterson and Tyler Greene led off with walks. Steven Blackwood followed with a slow grounder that was a potential double-play ball. But shortstop Russell Triplett was unable to hold on to Storrer’s toss, as all runners were safe. Micah Owings followed with a double to left-center to score two runs. Brandon Boggs then hit an RBI groundout to second, allowing Blackwood to score. Owings came home when Lumsden threw a wild pitch. There would have been a play at the plate, however Lumsden failed to cover.

The Yellow Jackets added to their lead in the fourth inning with an unearned run. Jake Hall slapped a two-out single to center, went to second on a passed ball, and scored on Mike Trapani’s single through the left side. Tony Sipp’s throw from left appeared as if it would be ahead of Hall, but third baseman Herman Demmink cut off the relay throw and retired Trapani in a “pickle.”

Clemson cut into the lead in the sixth inning on Lou Santangelo blasted a long opposite-field homer to right field, his team-leading 15th long ball of 2004. Santangelo, who was pitched on the outer half of the plate all series, moved closer to the plate for the first time that at-bat, enabling him to crush the pitch on the outside corner. Back-to-back singles to right by freshmen Andy D’Alessio and Tyler Colvin put runners at first and second with one out, but the Tigers’ rallied stalled. Triplett struck out and Demmink flied out to shallow center on a 3-1 pitch up and out of the zone to end the inning.

The Tigers avoided further damage in the bottom of the sixth inning. Clifton Remole singled and went to third on Hall’s opposite-field double. Fortunately for Clemson, the ball caromed into the bullpen for a ground-rule double, as Remole would have scored had the ball not gone out of play. After reliever Steven Jackson walked Trapani, he struck out Patterson with the bases loaded.

Demmink’s fly out in the previous inning proved big for the Yellow Jackets, as Garrick Evans led off the seventh with a line-drive homer to right-center, his second of the season. After Sipp lined out to left, Storrer ripped a single up the middle and scored on Harvey’s hard-hit double passed the third baseman to cut the Yellow Jacket lead to 5-4. But Clemson’s struggles with runners in scoring position continued, as Santangelo flied out to right and D’Alessio flied out to center.

The Yellow Jackets responded in the bottom of the seventh inning and capitalized on another critical error that cost Clemson three runs. A line-drive single by Blackwood and a slow grounder through the left side by Owings set the scene. Boggs then hit a “tailor-made” double play ball to Storrer at second that would have gotten the Tigers out of the inning, but the sophomore booted the grounder, as all runners were safe. Remole then laced a grounder through the right side to score Blackwood and Owings. Mike Nickeas loaded the bases with a perfectly-placed single to shortstop and pinch-hitter Whit Robbins flied out to deep right-center to bring home Boggs and give Georgia Tech an 8-4 lead.

Harvey led the Tigers with two doubles and two RBIs. Santangelo and Evans also added solo homers. Brad McCann, Clemson’s leading hitter, effectively missed his third-straight game with a bruised arm. He is still listed as day-to-day. Georgia Tech was led at the plate by five players with two hits, including Owings and Clifton. They each had two RBIs as well.

Clemson will have three days off before playing at Duke Thursday at 7:00 PM. The series and regular season will conclude with games Friday (5:00 PM) and Saturday (1:30 PM) at Jack Coombs Field.