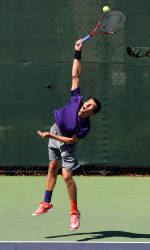 Maden a junior from Stuttgart, Germany led the Tigers in 2012 in overall singles wins with a 24-12 record, and in dual match wins with a 13-9 mark. He started every match at number-one singles and number-one doubles.

This past fall, he advanced to the final four of the ITA Carolina Regional in Chapel Hill, NC. He also advanced to the second round at the ITA All-American Main Draw in Tulsa, Oklahoma on October 6, 2011. He was ranked most of the season in the ITA singles poll and is currently ranked 65th nationally in singles play.

Maden is majoring in financial management.