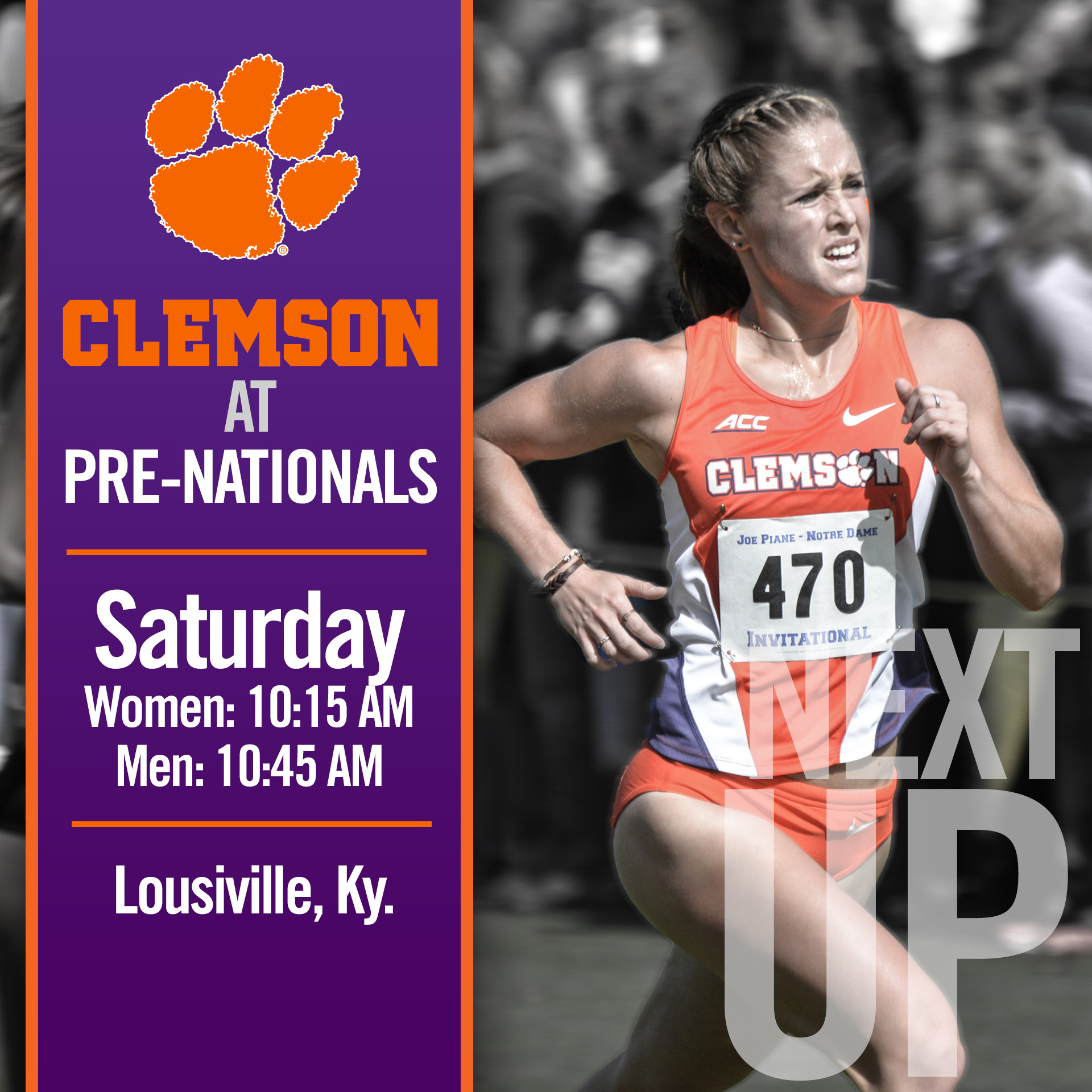 LOUISVILLE, Ky. – After a week of rest, both the men and the women are back in action on Saturday in the Pre-National meet hosted by the Louisville Cardinals. The women will kick things off for Clemson at 10:15 a.m., with the men following at 10:45 a.m.

“We were a little bit slighted at Notre Dame, in terms of not being included in the faster section,” said distance coach, Michael Porter. “We’re not in the faster section this weekend at Louisville, either. We’ll have a chance to win, along with several other schools.”

Despite feeling slighted for a second straight week, the men will look to use it as fuel again as they responded well two weeks ago, winning their race at Notre Dame.

“The guys responded and executed well at Notre Dame. We wanted to establish ourselves up front, and we did that the entire race. It’ll be a little tougher this weekend. If James (Dwyer) and James (Quattlebaum) run the way they have, we’ll be fine. Dwyer’s confidence is starting to come around. I expect him to drop a fast time this weekend. He’s ready to run really well.”

“I expect a better result as a team this weekend. The goal is to win our race. But we need more momentum going toward the ACC Championships.”

On the women’s side, this will be their first 6K race of the season. Even with the longer course, Coach Porter is still optimistic about this group of harriers moving forward.

“Going from 17th in the Southeast Region to at least being ranked fifth recently, with the same group of girls, is a big improvement. We have people that can run well, and it’s starting to come together.”

“Grace Barnett has a breakthrough performance in her, and if she does that this weekend, it’ll have her confidence high going into ACCs. Physically, she’s able to do that. She’s got to have the confidence to go out and execute. If you have someone that can score that low, the other pieces will fall into place.”

Barnett has led the Tigers in each of Clemson’s four races this season, finishing in the top 10 in three of them. Her last time out she finished 23rd overall in a very competitive field at the Notre Dame Invitational.

Her supporting cast is coming along as well and it’s a cast that’s only getting better each week.

“We’re adding Ersula (Farrow) into the mix this weekend. It’s another piece that will add to our depth, much like we did at Notre Dame with Kaley (Ciluffo).”

Ciluffo was the third Tiger to finish in her first collegiate race at Notre Dame, right in between Evie Tate and Bianna Feerst.

“Are we surprised by Kaley’s first performance at Notre Dame? No. I expect her to be better this weekend. Brianna Feerst and Evie Tate have trained together all season. If we get Bri and Kaley to the level Evie is, then we become really solid.”