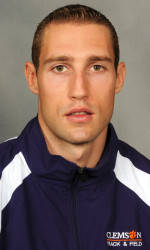 CLEMSON, SC – Xavier Tromp of the men’s track & field team was named ACC Performer-of-the-Week, the conference office announced Tuesday. Tromp won the pole vault over the weekend at the Yellow Jacket Invitational in Atlanta by breaking the school record with 17’11” clearance. His mark also ranks atop the Division I performance list for the event.

Mitch Greeley previously held the school record in the event, clearing 17’10.5″ in his senior season of 2008. Tromp had some tense moments prior to breaking the record, however. The exchange student from Lingolsheim, France came down to his third and final attempt at his opening height of 16’6.75″. But he cleared it, and then went over his next two heights in just one attempt apiece to establish a new Clemson standard.

Tromp is the first men’s track & field athlete from Clemson to be named ACC Performer-of-the-Week in 2010. The Clemson men’s and women’s teams return to action this weekend in Gainesville, FL for the Pepsi Florida Relays.