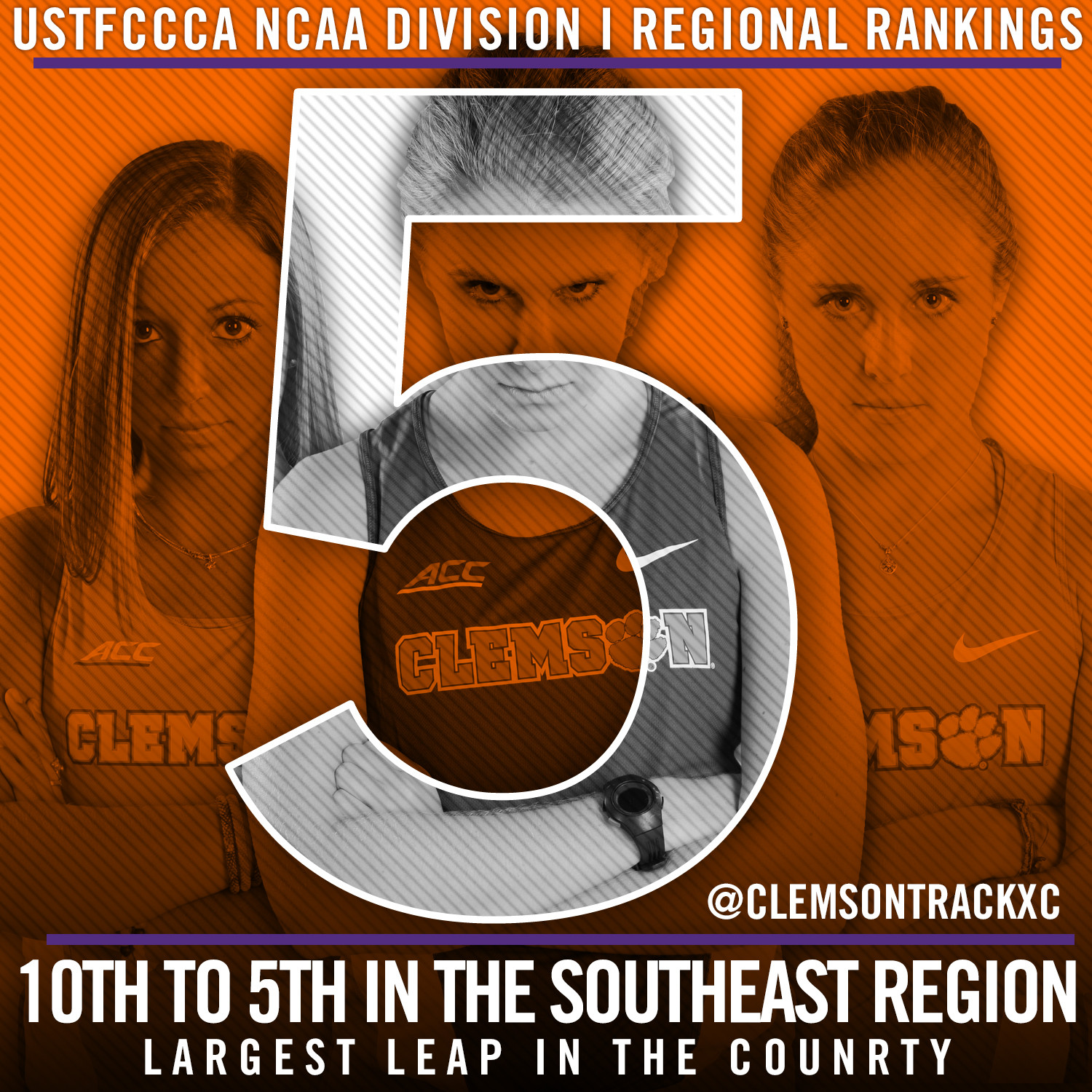 Women?s XC Leaps To Fifth In The Southeast

CLEMSON, S.C. – This week the USTFCCCA released its regional rankings and has the Clemson women’s cross country team as the fifth best team in the Southeast Region. The women jumped from 10th to fifth this week, which is the largest leap of any women’s program in the country. The ranking is also the women’s program’s highest ranking since 2011 when it was ranked as high as third in the region and was recognized as the 30th best team in the nation for two weeks.

“The ranking kind of gives you a good idea of where you are and our conference is one of those strong cross country conferences,” head coach Mark Elliott said. “The telltale sign is that our team is getting better, I think the ranking is warranted, it’s not overstated based on the way we’ve been racing against other regional ranked and some national ranked competition. So I’m proud of the way the ladies are doing.”

“Coach Porter is doing a very good job as it relates to that and I always say it’s a continuation of what we started since we got here. Clemson has a rich history in cross country, we want to have a balanced program and the women are showing that. We’re all proud of the way they’re ranked and our goal is to keep building on that. This is a milestone as it relates to them, but it’s just a short term one and our ultimate goal is to keep getting better; better in the region and then hopefully have a great day at the regional meet and have an opportunity to think about national cross country as it relates to the team.”

This is also the highest ranking of this coaching staff’s tenure as Coach Elliott took over the program in 2013 after 20 years of success and national prominence at LSU.

Headlining Clemson’s top five harriers is Grace Barnett as leads a supporting cast of Evie Tate, Brianna Feerst, Catherine Herring and Elizabeth Dawson. Barnett has finished first for the Tigers in each of the three races. Arguably, her most impressive race so far is her sixth place finish at the very competitive Commodore Classic. She finished the challenging 5K course in 17:12.5 among a field of teams that consisted of 23 teams, 10 that were regionally ranked two that were nationally ranked.

“None of our top five girls through the first three meets broke 11 minutes in the two-mile and none of them broke five minutes in the mile in high school. They’re just a group of girls that came together and it’s a pretty good group. They’re not top tier recruits to where it’s expected, they’re just working hard and it’s coming through.”

Clemson Cross Country has its toughest test yet slated for Friday, October 2 in South Bend, Indiana at the Notre Dame Invitational.