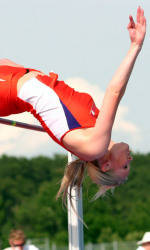 The Clemson women’s track & field team competed at the Orange & Purple Classic on Saturday at the Rock Norman Complex. Della Clark won the hammer throw with a regional-qualifying mark. Patrice McMillan also won the 800m on Saturday, her second win of the season in that event. In total, five Lady Tigers won events and two posted regional-qualifying efforts.

Allison Bradshaw finished runner-up in the shot put after recording a mark of 41’10”. Clark captured the hammer throw title after a toss of 184’1″. Rochelle Kokayko hit a mark of 179’6″ to finish second, while Catheryne Porter (142’9″) placed eighth.

Krystal Woods captured the javelin throw with a mark of 139’9″. She already has qualified for the East Region Championships in that event with a mark of 144’7″ earlier this season. Woods also was fifth in the discus at 136’5″, while Porter finished sixth (132’4″).

The Lady Tigers return to action next weekend to take part in the North Carolina A&T Invitational in Greensboro, NC.