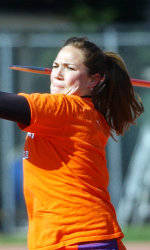 Clemson, SC – The women’s track & field team will be one of 13 schools participating in this weekend’s Yellow Jacket Invitational, held at the George C. Griffin Track on the Georgia Tech campus in Atlanta, GA. The Lady Tiger program began the 2008 outdoor season last weekend with success, winning eight events at the Clemson Relays.

Three student-athletes from Clemson will compete in the javelin throw at 10:30 AM Saturday, including multi-event performers Linda Buchholz and Liane Weber. The natives of Germany are also entered in the 100m dash Saturday afternoon. Buchholz is the school record-holder in the javelin with a throw of 152’5″, which came in this same meet last season. Bethanie Wachna, who ranks fourth on the all-time javelin performance list, will also compete Saturday.

Caroline Kennedy will make her outdoor season debut in the pole vault following the men at 1:00 PM. Kennedy ranks fourth in school history in the outdoor pole vault with a 12’6″ clearance last year as a freshman. At 1:30 PM, Catheryne Porter is entered in the discus throw for Clemson.

Six student-athletes are slated for the 100m dash at 2:10, including the team’s top performers in the event Parker and Scott. Anastasia Wilson, ranked fifth on the all-time outdoor high jump list, leads a group of three in the event at 2:30 for Clemson.

The 200m dash will be held at 4:00 Saturday and will include eight entries from the Lady Tiger squad, again including Parker and Scott. Sunday Ford will wrap up the individual racing action for Clemson on Saturday with the 5000m run at 4:35 PM.