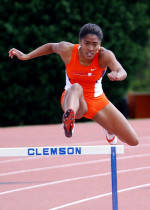 Women’s Track & Field to Participate in Carolina Classic This Weekend

Clemson, SC – Nearly 30 members of the women’s track & field team will be competing this weekend at the Carolina Classic in Chapel Hill, NC. The meet, spanning Friday and Saturday, will be held at the Eddie Smith Field House. The venue will also serve as host to next month’s ACC Indoor Championships.

Patricia Mamona has been arguably the team’s top performer through this stage of the season. She currently holds the top mark in the ACC in the long jump and the second-best mark in the triple jump. She has provisionally qualified in the triple jump, and will compete in the event for the second time this season on Friday at 6:00 PM. April Sinkler and Nakeisha Wineglass are also entered for Clemson. The long jump will be Saturday at 11:00 AM. Six student-athletes from Clemson will be competing in that event.

The 400m dash will also be held Friday evening. Sierra Hill leads a group of five entries from the Lady Tiger squad in that event. Rochelle Kokayko and Catheryne Porter will also compete Friday, as the women’s weight throw is scheduled for 4:00 PM.

The pole vault will take place Saturday at 1:00 PM, with the high jump shortly thereafter. Caroline Kennedy was All-ACC in the vault last year, and currently boasts the top mark on the team this season. In the high jump, sophomore Anastasia Wilson cleared 5’7″ last week in Florida. Her mark ranks in a tie for fifth all-time in school history.

Polly Hardy leads the hurdlers into action at 12:10 PM for the preliminary round. She ranks third in school history in the 60m hurdles and has already posted a provisional NCAA qualifying time (8.41) this season. The finals will be at 2:00 PM.

A handful of middle distance competitors will be in action as well this weekend, led by freshman Joanie Castagno in the 800m and fellow newcomers Abby Iselborn and Jill Yandle in the mile. The mile is scheduled for 1:05 PM and the 800m for 2:30 PM.

The 4x400m relay will be the final event of the afternoon Saturday at 5:00 PM.