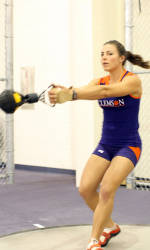 Clemson, SC – In what will be the final tune-up for the Clemson women’s track & field team prior to next week’s ACC Championships, the Lady Tigers will host the Solid Orange Classic on Saturday at the Rock Norman Track. The meet will get underway at 10:00 AM and admission is free to the event.

Caroline Kennedy will help get things started with the pole vault at 10:00. She will be joined by Emily Barlage and Amy Morrison. Maggie Bernard is entered in the 3000m steeplechase at 10:15. Polly Hardy, a regional qualifier in the high hurdles, will compete in the event at 10:45 alongside Krystal Barringer, Linda Buchholz, and Liane Weber.

The women’s long jump at 11:00 AM will feature seven student-athletes from Clemson’s roster, including standouts Patricia Mamona and April Sinkler. Both will be making their respective outdoor debut in the jumps. Mamona will attempt to qualify for regionals in the triple jump following the long jump.

Rochelle Kokayko will make her outdoor debut, approximately around noon. The women’s hammer throw will follow the men’s (10:00 AM) competition. Kokayko ranks among the top five in school history in the event and has qualified for the East Region meet in her first two seasons at Clemson.

The prelims for the 100m dash will be held at 11:15 AM, followed by the 4x100m relay. Clemson’s “A” lineup will be Ra’Sheena Parker, Nakeisha Wineglass, and Krystal Barringer. Candice Johnson leads a group of four in the 800m run scheduled for 1:55 PM.

Sierra Hill and Michaylin Golladay lead Clemson’s efforts in the intermediate hurdles this season. Those two will compete at approximately 2:20 PM. Parker and Scott are slated for the 200m dash shortly thereafter. The 4x400m relay will be the final running event of the afternoon, scheduled to begin at 3:50 PM. The Lady Tigers’ number-one team will be comprised of Hill, Johnson, Hardy, and Christina Mason.

Saturday afternoon will feature a full slate of field events for the Lady Tigers. The high jump and shot put are scheduled for 2:00 PM. Anastasia Wilson leads the vertical jumpers, while Allison Lake will contend for the shot put title. Lake will also compete in the discus throw, which will follow the men’s (2:00) competition. Catheryne Porter, the team’s top performer in the discus, will also compete in the event.