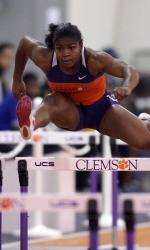 BLACKSBURG, VA – The Clemson women’s track & field team began defense of its ACC crown on Thursday at the indoor conference championship meet at Virginia Tech’s Rector Field House. Whitney Fountain, a freshman from Bronx, NY, earned her first All-ACC honor with a third-place finish in the pentathlon. Sophomore teammate Karine Farias was fifth in the event, giving the team a total of 10 points after the first day at the ACC Championships. Clemson and Maryland are tied atop the team standings after day one.

“I’m very pleased with our start at the ACC Indoor Championships,” said Lawrence Johnson, Clemson’s Director of Track & Field. “Whitney really stepped up today. The first two events were key for her, she was able to do well and keep plugging away. Karine hung in there and earned some valuable points for the team as well.”

Farias and Fountain were fourth and fifth, respectively, among the multi-event athletes in the 800m run. Farias came across the line with a time of 2:25.21, followed by Fountain at 2:25.44.

On the men’s side, Miller Moss leads the heptathlon after four of the seven events. The final three will be contested Friday, beginning with the 60m hurdles at 12:00 PM. The Sumter, SC native has a total of 3,218 points. Rene Stauss of Virginia Tech is second with 3,177.

He closed out the opening day with a personal best effort in the high jump. He cleared 6’8.25″ on his second try, tied with defending champion Mateo Sossah (North Carolina) for the top jump of the day. The fashion with which Moss advanced to that height was tremendous. He cleared two straight heights (6’6″ and 6’7″) on his final attempt to stave off elimination.

“It was exciting to watch him compete today,” Johnson said. “He had some solid marks, but nothing spectacular early on. To his credit, he didn’t panic. He started cooking in the high jump. He really seemed to feed off the energy in the building that was created by the members of our team who came out to support him.”

Claudio Delli Carpini saw his first action of the 2011 indoor season on Thursday. A sophomore out of the New York area, he is participating in his first collegiate multi-event competition. He is sixth in the individual standings with a total of 2,705 points. His best events were the 60m dash, where he clocked a time of 7.36, and the high jump, where he cleared 6’3.5″.

The meet action heats up on Friday, with several field events scheduled as well as the preliminary rounds of several track events. Clemson’s first action outside of the heptathlon will be the women’s long jump and women’s weight throw at 1:00 PM.