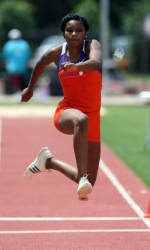 CLEMSON, SC – The Clemson women’s track & field team won its third straight ACC outdoor title in April, and followed it up with a tie for fourth at last week’s NCAA Championships. On Friday, three members of the team were responsible for a sweep of the annual Atlantic Coast Conference awards. Marlena Wesh was named ACC Outdoor Track Athlete of the Year, while April Sinkler was voted Field Athlete of the Year. Dezerea Bryant was the ACC’s Outdoor Freshman of the Year.

Wesh had a banner season on the track. The junior out of Virginia Beach, VA won the 400 dash at the ACC Championships and also helped the 4×100 and 4×400 relays to victory. In addition, she was runner-up in the 200 dash and received the ACC’s Most Valuable Track Performer award at the meet.

She followed with a pair of first-team All-America honors at last week’s NCAA Championships in Des Moines, IA. Wesh finished sixth in the 400 dash and helped the 4×100 relay to a bronze medal finish, best in program history. Wesh, who was also the USTFCCCA Southeast Region Track Athlete of the Year, will compete for Haiti in the upcoming Olympic Games in London.

Sinkler added a final honor to her highly decorated Clemson career. She was named ACC’s Most Valuable Field Performer at the championship meet after a win in the high jump and a pair of silver medals in the long jump and triple jump. The Stafford, VA native finished her career with a program-record six ACC Meet MVP honors.

Bryant earned a clean sweep of the ACC’s Freshman of the Year awards, having won indoor season as well. The native of Milwaukee, WI won ACC titles in the 100 and 200 dash, and ran third leg for the Tigers’ gold medal 4×100 relay as well. She then earned first-team All-America status with the 4×1, and second-team recognition in the 200 dash.

Bryant is the first Tiger female to be named ACC Outdoor Freshman of the Year since Stormy Kendrick in 2010. She qualified with “A” standards for the U.S. Olympic Trials, but has opted to compete at the USA Junior Championships instead.