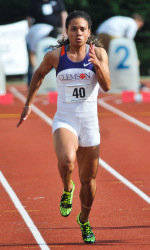 CLEMSON, SC – The Clemson women’s track & field team has been ranked No. 4 in the preseason national outdoor ratings. The announcement was made Thursday by the U.S. Track & Field and Cross Country Coaches Association (USTFCCCA). Oregon, the indoor NCAA champions, are No. 1 and the Ducks are followed by LSU and Southern Cal. The ratings are exclusively based on the marks and event rankings of returning student-athletes.

This outdoor season, the Tigers return all of their first- and second-team All-Americans from the indoor campaign. In addition, Clemson adds April Sinkler onto its roster for one final season. Her indoor eligibility expired in 2011, but she will begin her final outdoor season in a Clemson uniform this weekend as the Tigers compete in Orlando at the UCF Invitational. Sinkler was a first-team All-American in the long jump last season and qualified for the NCAA Championships in the high jump and triple jump as well.

In the sprints, Clemson returns Stormy Kendrick, who was injured in the 2011 outdoor season after winning Most Valuable Track Performer honors at the ACC Championships last April. Jasmine Edgerson returns alongside her in not only the sprints, but also the high hurdles. Clemson added Dezerea Bryant in the sprints, a move that paid off a few weeks ago when the freshman from Wisconsin was a first-team All-American in both the 60 and the 200.

The hurdles may be Clemson’s deepest unit this outdoor season. Brianna Rollins, two-time All-American in the 60 hurdles, looks to advance to her first NCAA Outdoor Championships. Her first two seasons were cut short due to injury. Bridgette Owens competed at last year’s national outdoor meet and is coming off a bronze medal performance in the 60 hurdles at the NCAA Indoor Championships. The Tigers added Keni Harrison to the squad, and she competed at nationals in the 60 hurdles. Harrison will compete in both hurdles during the outdoor season.

Marlena Wesh doubles as a 400 dash sprinter and 400 hurdler outdoors. She was ACC Champion in the 400 last April, and looks to win her fourth straight conference crown in the event next month. Also returning in the 400 hurdles is junior Sonni Austin, a second-team All-American in the event a year ago.

Other key contributors returning to the outdoor team are Alyssa Kulik and Kim Ruck in the distance events. Kulik was fourth place last June in the steeplechase at the NCAA Championships, while Ruck was ACC Champion for the Tigers in the 10,000 meters.

Clemson should have two formidable relays this outdoor season. The Tigers have earned All-America honors each of the past two seasons in the 4×100-meter relay, a team that looks to be stronger with the addition of Bryant.

Sinkler leads the Tiger field event athletes. She has seven individual ACC championships to her name, and six All-America honors as well. Sinkler ranks first in Clemson outdoor history in the high jump and long jump, and third in the triple jump. She will be joined in the latter two events by junior Jasmine Brunson, who was a triple jump All-American during the 2012 indoor season.

Brittney Waller is the top thrower on the roster and will have a strong chance to advance to the NCAA Outdoor Championships in the hammer. She ranks fourth in Clemson history in that event and is second on the school’s performance list in the discus as well.