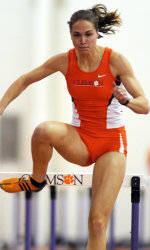 Women’s Track & Field Moves up to No. 4 in USTFCCCA Rankings

CLEMSON, SC – The women’s track & field team has moved to No. 4 in the latest rankings released by the U.S. Track & Field and Cross Country Coaches Association. The Tigers are coming off a championship performance at the ACC indoor meet this past weekend. It was Clemson’s first indoor women’s track & field championship at the conference meet since 1992, and just the second in school history.

Clemson has been ranked among the nation’s top 10 teams in women’s track & field this entire season, opening the preseason at No. 9 on Jan. 5. The latest jump is the biggest of the season for the Tigers, who moved up three spots from their No. 7 position last week.

The weekly indoor rankings are based solely off student-athlete performance, and Clemson received several notable performances last weekend at the ACC Championships in Blacksburg.

After posting NCAA automatic qualifying marks in both the high jump and long jump over the weekend, Clemson junior April Sinkler now ranks in the top five nationally in both. Multi-event athlete Liane Weber, who won her third ACC championship in the pentathlon, is atop the national performance list with 4,262 points. She established an ACC record with her performance last weekend. Kim Ruck added her name to the list of automatic NCAA qualifiers, winning the 5000 meters in a time of 16:04.02.