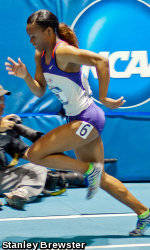 CLEMSON, SC – The Clemson women’s track & field team has moved up one spot in the latest national ratings to No. 3 in the nation, according to data released Tuesday by the U.S. Track & Field and Cross Country Coaches Association (USTFCCCA). Also on Tuesday, freshman Dezerea Bryant was named the ACC Women’s Track & Field Performer of the Week by the conference office.

Bryant won the 200-meter dash and was runner-up in the 100 dash, while leading the 4×100-meter relay to victory over the weekend at the Jim Click Shootout in Tucson, AZ. The Tigers finished runner-up in the scored meet, behind host and current No. 14 ranked team Arizona. Bryant moved into the top 10 in school history in both events, and is ranked as high as fourth in the country in the 200-meter dash.

Clemson began the 2012 outdoor season at the No. 4 position in the national ratings that were released by the USTFCCCA two weeks ago. Clemson jumped Southern Cal for the No. 3 spot in the ratings this week, behind only Oregon and LSU. The rest of the women’s national top 10 is made up of Texas A&M, Arkansas, Oklahoma, Texas, Kansas and Texas Tech.

Marlena Wesh is Clemson’s only athlete to currently lead the nation in an individual event. She is atop the college leaderboard in the 400-meter dash, having clocked a 52.60 at the UCF Invitational on March 24. Wesh is also 10th in the nation in the 400 hurdles.

Brianna Rollins and Bridgette Owens, who finished second and third, respectively, at the NCAA Indoor nationals in the 60 hurdles, are ranked exactly the same in the 100-meter hurdles. Rollins bested the school record with a time of 12.78 last weekend in a runner-up finish in Tucson, while Owens was third with a time of 12.88, also a personal best. Rollins teamed with Bryant, Wesh and Jasmine Edgerson earlier this season to post the nation’s No. 3 time in the 4×100-meter relay at 43.50. That also established a Tiger women’s relay record.

Three distance event athletes are ranked among the nation’s top five. Alyssa Kulik, fresh off a meet record and winning time of 10:12.25 in the steeplechase at the Raleigh Relays, is second according to the Track & Field Results Reporting System. In the 5000 meters, Natalie Anthony and Kim Ruck are fourth and fifth in the nation, respectively. Anthony had a personal best and a Clemson freshman record time of 16:16.27, while Ruck ran 16:16.67 in Raleigh last weekend.

In the field events, triple jumpers April Sinkler and Jasmine Brunson both rank among the nation’s top six. Sinkler jumped 43’8.5″ last weekend, a personal best, in a winning effort at the Jim Click Shootout. Brunson’s mark of record was a jump of 42’11” two weeks ago at the UCF Invitational in Orlando, FL.