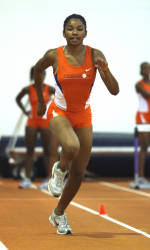 Clemson, SC – Seven student-athletes from the Clemson women’s track & field team will travel to Tallahassee, FL this weekend to compete in the NCAA East Region Championships, held at the Mike Long Track complex on the campus of Florida State University. The East Region is the NCAA’s largest of the four regions, as it is comprised of over 100 Division I track & field programs.

The regional format is now in its sixth year of existence. The top five finishers in individual events and top three relay teams from each region advance to the NCAA Championships. The national meet will be held June 11-14 in Des Moines, IA. Clemson has qualified athletes in six different events for the meet, which gets underway Friday. Two of the events – high jump and javelin throw – will feature multiple Lady Tiger competitors.

Patricia Mamona actually qualified in two events for Clemson, but will only be competing in the triple jump. She qualified in the long jump via an All-ACC finish in the event, but has decided to focus solely on making her second consecutive trip to the NCAA Outdoor Championships. Mamona finished third in the triple jump last year as a freshman, thus earning an automatic spot at nationals. The triple jump will take place Saturday at 4:00 PM.

Clemson’s first competitor Friday will be sophomore Caroline Kennedy, who will be making her second straight trip to the East Region Championships in the pole vault. Kennedy came through with a clutch showing two weeks ago at the Georgia Tech Invitational, where she cleared the regional standard and a personal best 12’7.5″. Kennedy was sixth place as a freshman at last year’s regional, just missing the automatic berth. The pole vault will begin at 2:00 PM.

Sinkler’s tie is with sophomore Anastasia Wilson, who also jumped 5’8.75″ at the Georgia Tech Invitational. For Wilson, this marks her first-ever trip to the East Region Championships. She has done well focusing only on the high jump this season. Wilson tied for fourth in the event at the ACC Championships last month.

Linda Buchholz and Bethanie Wachna have qualified for the javelin throw, scheduled for Friday at 4:30 PM. Buchholz, the school record-holder in the event (152’5″), competed at last year’s regionals in the javelin. Wachna, an All-ACC performer this season in the javelin, ranks second in Clemson history with a mark of 145’11”.

Polly Hardy, a senior on this year’s team, has qualified for the third straight year in the 100m hurdles. She owns a season-best time of 13.45, which she put together three weeks ago at the Orange & Purple Classic. Hardy was fifth place this season at the ACC Championships in the event, and is hoping for her first-ever trip to the NCAA Outdoor Championships. The prelims will be held Friday at 4:40 PM, with the final set for Saturday at 4:45.