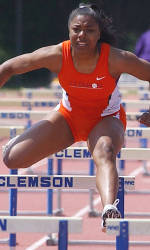 Philadelphia, PA – Patricia Mamona was sixth in the championship triple jump competition Friday and also led the Lady Tigers to a near-record performance in the shuttle hurdle relay through two days at the historic Penn Relays. Mamona posted a regional-qualifying mark in the triple jump, while running second leg for Clemson in a fourth-place shuttle hurdle relay run.

The Lady Tigers entered the event with a great chance at breaking the school record in the shuttle hurdle relay, which was a 56.29 set in the 2005 season. With four solid hurdlers on hand, Marcia Noad’s squad went after the record Friday at Franklin Field. The group of Krystal Barringer, Mamona, Michaylin Golladay, and Polly Hardy placed fourth overall after an outstanding time of 56.35. The time ranks second in school history for the event.

Mamona took sixth in Friday’s championship section of the triple jump. Already the #2 ranked jumper in school history based on performance, she hit a mark of 42’6.25″. In the collegiate section, sophomore teammate Nakeisha Wineglass was 13th overall after a mark of 38’8.25″.

Mamona was also Clemson’s top finisher in the long jump on Thursday. She finished 11th after posting a wind-aided jump of 19’4″. April Sinkler, a freshman on this year’s squad, was 18th with a mark of 18’5.25″.

The action will wrap up for Clemson on Saturday with the running of the 4x800m relay, a group which will feature Candice Johnson and three freshmen.