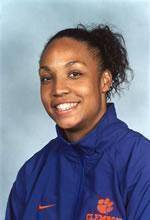 The women’s track & field team completed day one of competition at the Clemson Relays on Friday, March 24. Krystal Woods posted a regional-qualifying mark in the javelin throw and topped her personal best in the event as well. Jenny Barton and Sunday Ford won the 3000m steeplechase and 10,000m run, respectively, to also highlight Friday action.

In the long jump, Tonya Nwankwo finished eighth for the Lady Tigers after posting a mark of 17’4.75″. Charmayne Smith also competed in that event for Clemson, as she leaped 16’8.5″ but did not advance to the finals.

Woods was third in the javelin throw after posting a mark of 144’7″, which was better than her previous best of 144’1″ set last season. She improved on her preliminary toss by more than 18 feet. Rachel McLaurin also competed in the event for the Lady Tigers, as she posted a mark of 86’1″ which was her season-best.

The action continues tomorrow at the Rock Norman Outdoor Track Complex. The first women’s event scheduled to get underway is the 5000m run 10:00 AM.