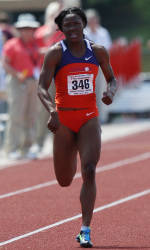 CLEMSON, SC – The Clemson women’s track & field team is back atop the national collegiate rankings this week, according to data released by the USTFCCCA on Tuesday. The Tigers jumped Texas to reclaim the top position for the second time in the last three weeks. The rest of this week’s top five spots are held by LSU, Texas, Florida and Kansas.

Clemson ascended to its first-ever No. 1 national ranking in women’s track & field two weeks ago after winning its sixth consecutive ACC championship. The Tigers have won each of the last three indoor and outdoor ACC titles.

Marlena Wesh remains atop the national standings in the women’s 400-meter dash. She broke an ACC meet record with a time of 51.43 in the finals in Charlottesville, VA. Wesh is No. 9 on the national performance list for the 200 dash and also part of Clemson’s nationally-ranked relay units, the fourth-ranked 4×1 and 14th-ranked 4×4.

Brianna Rollins is No. 2 nationally with a time of 12.78 in the 100 hurdles, but has not competed since the prelims of the 200-meter dash three weeks ago. Bridgette Owens, ACC champion in the 100 hurdles, is third nationally in the event. Clemson has four of the nation’s top 17 ranked high hurdlers, including No. 11 Jasmine Edgerson, who is also ranked 13th in the 100 dash and 19th in the 200 dash.

Dezerea Bryant is ranked among the nation’s top 13 in the two short sprints, the 100 and 200. She holds the nation’s eighth-best time in the 200 and was ACC champion in both events. Another freshman, Keni Harrison, boasts the No. 9 time nationally in the 400 hurdles after she won ACCs in 57.33.

In the distance events, Alyssa Kulik remains in the top five nationally in the 3000-meter steeplechase. Kulik won the ACC crown with a school and meet-record time of 9:52.90. She is scheduled to earn her undergraduate degree on Friday, May 11.

Clemson’s top ranked field event competitors are April Sinkler and Jasmine Brunson in the triple jump. Sinkler holds the nation’s fourth-best mark with a jump of 43’8.5″, while Brunson is No. 9 on the national performance list at 42’11”.