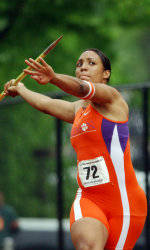 Atlanta, GA – The Clemson women’s track & field team wrapped up day one of competition at the North Carolina A&T Last Chance Meet on Friday. Krystal Woods won the javelin throw, while Beth Jordan was runner-up in the pole vault to lead the Lady Tigers on day one of the meet.

Jordan cleared 10’11.75″ and was second in the pole vault Friday. Woods competed in the javelin throw and won the title with a toss of 126’5″.

The team returns to action on Saturday. Clemson’s first event will be the hammer throw at 12:00 PM, featuring Della Clark and Rochelle Kokayko.