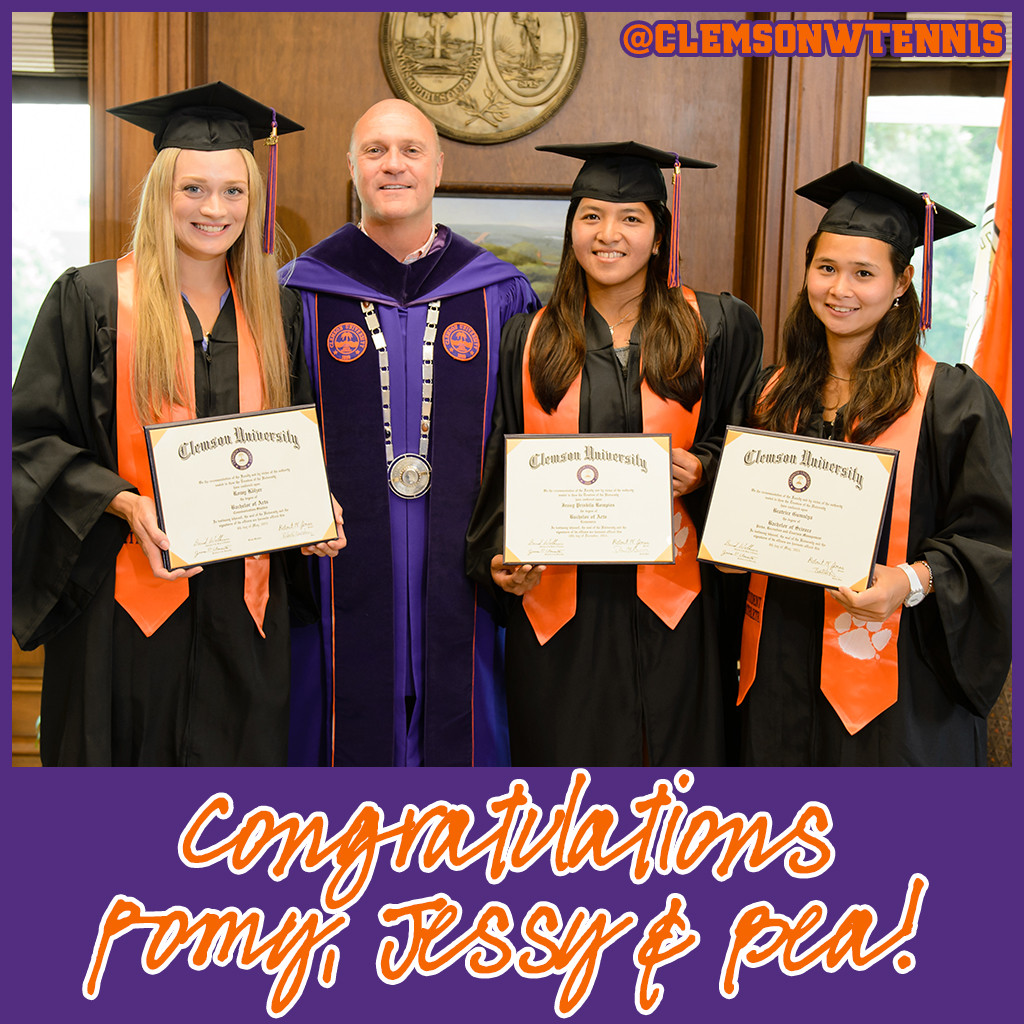 When the Clemson women’s tennis team learned it would be traveling to Tuscaloosa, Ala. for the first and second rounds of the NCAA Championships on May 8-9, one of the first things that senior Romy Koelzer, a native of Betzdorf, Germany, said was, “We are going to miss graduation.”

It was true. Clemson University’s May graduation ceremony was scheduled to be held on Friday, May 8, and the Tiger tennis team, which includes Koelzer and fellow seniors Beatrice Gumulya and Jessy Rompies, both from Jakarta, Indonesia, was scheduled to play South Alabama in the NCAA First Round the same day, in Tuscaloosa.

The thought of missing the graduation ceremony may have been a bit disappointing for the three Tigers, but what they didn’t realize at the time was that Head Coach Nancy Harris and Assistant Coach Maria Brito had a plan in motion.

The 21st-ranked Tigers made the trip to Tuscaloosa, where they defeated South Alabama 4-0 in the first round, and went on to upset regional-host and 13th-ranked Alabama 4-2 in the second round. The win over the Crimson Tide secured Clemson’s spot in the NCAA Sweet 16 for the 10th time in the last 12 seasons.

After the return bus trip from Tuscaloosa to Clemson in the early hours of Sunday morning, the coaches told the team it would be leaving for Waco, Texas (the site of the NCAA Team Championships) on Tuesday and that on the afternoon of Monday, May 11, the team should meet at Sikes Hall on the university campus, where Clemson President James P. Clements would present Gumulya, Koelzer and Rompies with their diplomas.

On Monday afternoon, the three graduates, the five other players on the tennis team, members of the coaching and support staff and also some of the Tigers’ family members and close friends, met at Sikes Hall. Included in the family members in attendance were Rudy, Siantiningsih and Elvina Gumulya, the parents and sister of Beatrice Gumulya, who, just three days earlier in Alabama, had seen their daughter and sister play collegiate tennis for the first time ever.

President Clements was donned in full academic regalia, and Gumulya, Koelzer and Rompies wore caps and gowns. After introductions with the graduates, the President invited the entire group into his office, where, following a brief tour and explanation, he shook each senior’s hand, presented her with her diploma and posed for pictures.

Following the diploma presentation, the entire group, the President included, went outside to take additional pictures on the front steps of Sikes Hall, one of the iconic and scenic buildings on Clemson’s campus.

After pictures were complete, and before he returned to his office, President Clements asked to speak to the members of the team. He shook hands and congratulated all eight players, noting that the NCAA Sweet 16 was an impressive accomplishment that made him and the University proud, wished them luck and mentioned that he would be following their progress in Waco.

Graduation is a special and memorable time for all students, a time to be recognized and rewarded for years of hard work, a time to celebrate and enjoy with friends and family. Monday’s ceremony with Gumulya, Koezler and Rompies was no different. The graduates were personally congratulated by the President, they were surrounded by their teammates, who during their time at Clemson have become their best friends, their families, their coaches and staff. Not only that, they had the chance to do all of that while also celebrating two NCAA tournament wins and a berth in the NCAA Sweet 16. While it did not include the traditional experience of walking across a stage, having their own personalized ceremony was arguably even more special and more memorable than most.