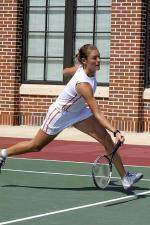 The Clemson women’s tennis team is ranked third in the first poll of the 2005 season released on Jan. 11 by the Intercollegiate Tennis Association. It is the highest ranking in the program’s history. In the 1986 season, the team was ranked fourth from March 4 through April 14. The team had also previously been ranked #4 in the 2004-05 preseason poll.

Four players were listed in the ITA singles poll. Senior Julie Coin, from Amiens, France, is ranked fifth in the nation. She finished the 2004 fall season with a 9-2 record, and she won the Furman Fall Classic at the flight one position. Coin reached the semi-finals of the Riviera/ITA All-American Championships in October and the ITA National Intercollegiate Indoor Championships in November.

Freshman Romy Farah earned a national ranking of 88th after completing the 2004 fall season with a 7-2 overall record. The native of Cali, Colombia won the flight four singles in the Furman Fall Classic. She advanced to the qualifying round of the Riviera/ITA All-American Championships after winning three of four matches in the prequalifying round.

Daniela Alvarez is ranked #97 in the poll. The junior from Santa Cruz, Bolivia posted a 3-5 mark for the fall season. In the consolation bracket of the Riviera/ITA All-American Championships she upset #28 Anna Erikson of Sacramento State by a score of 6-3, 6-3.

Sophomore Maria Brito is listed 114th in the ITA poll. The Mexico City native finished with a 4-5 overall record in fall play. She posted an upset over 46th-ranked Lyndsay Shosho of Georgia Tech in the consolation bracket of the Riviera/ITA All-American Championships.

Two Tiger doubles teams are listed among the top in the nation in the ITA doubles poll. Alvarez and Brito are ranked 21st and Coin and Alix Lacelarie are ranked 25th. The duo of Alvarez and Brito compiled a 7-5 record in the fall season. After winning their three matches in the qualifying round of the Riviera/ITA All-American Championships, they advanced to the main draw of the tournament. The team also reached the semi-finals of the ITA Southeast Regional Championships before falling to Kentucky’s third-ranked team of Sarah Foster and Aibika Kalsarieva.

Coin and senior Lacelarie were 3-1 in fall play. They advanced to the semi-finals of the Southeast Regional before falling to Kim Coventry and Jodie Schwenk of Kentucky.