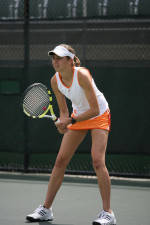 Women’s Tennis In Action This Weekend

CLEMSON, SC – The Clemson women’s tennis team will be in action this weekend at two different tournaments. Estefania Balda and Laurianne Henry will travel to California for the prequalifying singles round of the 2008 Riviera/ITA All-American Championships, and the rest of the team will compete in the annual Furman Fall Classic in Greenville, SC.

Balda, the fifth seed out of 64 players, will face Brittany Blalock of Cal Poly on Saturday on the campus of Pepperdine University in Malibu. Henry, who earned the #7 seed for the tournament, will take on Fresno State’s Renata Kucerkova in the opening round. Eight players will advance to the qualifying round of the All-American, which will begin on Tuesday.

Meanwhile, the three-day Furman Fall Classic will kick off on Friday morning at the Mickel Tennis Center. Ani Mijacika, the nation’s #2-ranked player, will look to defend her title at the top flight. Rookie Ina Hadziselimovic is entered in the flight three bracket. Alexandra Luc will participate in the flight four bracket, and Federica van Adrichem is schedule to compete in the number-five bracket.

In doubles action, Mijacika and Van Adrichem will pair up at flight one, with the tandem of Hadziselimovic and Luc entered in the number three bracket.

In addition to the Tigers and host Paladins, Florida State, North Carolina, Northwestern, South Carolina, Tennessee and Vanderbilt will comprise the eight-team field. Friday’s singles action is slated to begin at 1:00 pm with doubles match-ups taking place at 9:00 am.