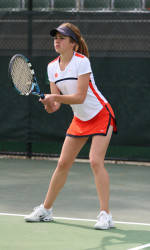 CARY, NC – The Clemson women’s tennis team came up short in a tough semifinal battle at the ACC Championships on Saturday afternoon, falling by a 4-3 margin to fourth-seeded Miami at the Cary Tennis Center in Cary, NC.

The Tigers, who were the number one seed in the tournament, dropped to 20-4 on the year, with two of the losses suffered against the Hurricanes. Miami, meanwhile, improved to 19-5 overall.

The match came down to the flight five contest where the Hurricanes’ Caren Seenauth defeated Tiger senior Maria Brito in a tie break in the third set, 7-4. Brito had claimed the first set, 6-3, while Seenauth responded with a 6-4 victory in the second. Seenauth led, 3-2, in the final frame before Brito won the next two games for the 4-3 lead. Each player then held serve to force the tie-break, where Seenauth triumphed, 7-4, to advance her team to Sunday’s finals.

Clemson pulled off a tough doubles victory as all three doubles flights fought tight battles. Maria Brito and Carol Salge then clinched the point for Clemson with a win at number three. The Tiger team trailed, 4-2, early in the match but rebounded to record the 8-5 victory.

The Hurricanes tied the match at 1-1 as Cohen, the nation’s #1 player, won in straight sets over Mijacika at the top flight, ending the ACC Freshman-of-the-Year’s 14-match winning streak. Miami then took a 2-1 lead with Banada’s 6-1, 6-2 victory over Balda at flight three.

Van Adrichem posted the Tigers’ second point of the afternoon, defeating Farah in straight sets at the number four position, 6-3, 6-4. The score was even at four games apiece in the second frame before van Adrichem held serve and broke Farah for her 17th victory of the spring. At flight six, Hadziselimovic easily claimed the first set, 6-0, over Sabatino before falling in the second, 6-3. She then won the third frame by a 6-4 margin to give Clemson a 3-2 advantage.

The flight two and five matches then went deep into third sets with the Hurricanes prevailing in both for the victory. Salge fell in a three-set contest to Vallverdu at number two before Miami’s Seenauth posted the win at flight five.

The Tigers will now await a bid to the NCAA Tournament to be made on Tuesday, May 1.