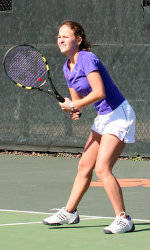 CARY, NC – The Clemson women’s tennis team, seeded fourth, advanced to the semifinals of the 2006 ACC Championships with a 4-1 defeat of #5-seed North Carolina on Friday morning at the Cary Tennis Center in Cary, NC. The Tigers, winners of 12 of their last 14 matches, improved to their overall record to 16-6, while the Tar Heels fell to 24-6 on the year. Clemson will face Georgia Tech, the number one seed in the tournament, on Saturday at 10:00 am.

The Tigers dropped the doubles point for just the seventh time this season but rebounded in singles play to claim the needed four points for the victory. Daniela Alvarez won a 6-2, 6-1 decision over #64 Caitlin Collins at the flight two position to knot the score at 1-1. Alexandra Luc then defeated Tanja Markovic at flight five by a score of 6-0, 6-3, and Kathi Gerber recorded a 6-4, 6-1 victory against Charlie Tansill in the flight six contest to put the Tigers ahead 3-1. All-ACC honoree Carol Salge, ranked #61, clinched the match for Clemson with an upset of the Tar Heels’ 34th-ranked Jenna Long at the top slot, 6-1, 4-6, 6-3.

Saturday’s semifinal appearance will be the Tigers’ 10th since the tournament changed to the current format in 1990 and the fifth under Head Coach Nancy Harris. Earlier this season, Clemson fell just short against Georgia Tech, suffering a 4-3 defeat in Atlanta, GA on Mar. 22. The teams have met on three previous occasions in the conference tournament with the Tigers holding a 2-1 edge. Clemson also leads the overall series score by a 21-5 margin.

The Yellow Jackets defeated NC State in Friday’s quarterfinals by a 4-0 decision and are ranked 10th in the most recent ITA Tennis poll. Georgia Tech sophomore Kristi Miller is currently the top ranked singles player in the nation, while the team of Miller and Lyndsay Shosho is listed ninth in the doubles poll.