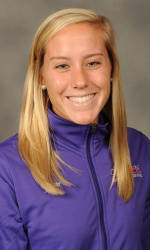 CHRISTIANSBURG, VA – The Clemson women’s swimming and diving team will take part in the 2012 Atlantic Coast Conference Championships beginning on Wednesday, February 15 at the Christiansburg Aquatic Center in Christiansburg, VA. The event will continue through Saturday, February 18 and will be held in conjunction with the ACC Men’s Diving Championships. Virginia Tech is the host school for the event.

“We are looking for many personal bests from our women’s team at the ACC Championships,” Head Coach Christopher Ip said. “This is a special group of women who have stayed to honor the Clemson swim program during its final phase-out season. They have motivated and inspired me each and every day of the season. Nothing fazes this team, they come to practice and competitions smiling, and they are willing to get down to business to try to show respect for the program in the classroom and in the pool. There is no other group of women that I would choose to honor the program with the respect it deserves.

“This is a veteran team with no freshmen representing the program at this year’s championship. I am looking for senior leadership and strong races from our juniors led by Meg Anderson, Tori Cervone, Kristen Redmond, Maddie Tarantolo, and Kelsey Krauss.”

The Tiger women’s squad finished 6-5 overall and 1-4 in the ACC this season. They are led by Meg Anderson, who ranks fourth in the ACC in the 50 freestyle and seventh in the league in the 100 freestyle. Divers Brooke George and Cassie Self are also ranked in the top ten in the conference in the platform dive.

Live video feed will be provided at theACC.com from Thursday through Saturday from 7 p.m. until 9 p.m. All championship information can be found at the official championship website, http://www.theacc.com/championships/12-swimming-diving-championship.html. Fans can also follow the action on Facebook and Twitter (@theaccchamps).