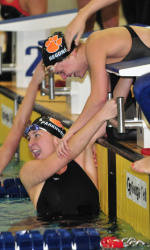 Clemson, S.C. – The Clemson Women’s Swimming and Diving Program, led by head coach Christopher Ip, was named the recipient of the ACC Sportsmanship Award for women’s swimming and diving. Teams receiving the awards have conducted themselves with a high degree of character and good sportsmanship, as determined by a vote of the league’s players and coaches.

The Tigers finished the season at 8-7 overall, 3-5 in ACC meets. The team finished 5th at the ACC Championships and were led by junior Michelle Parkhurst, who won three individual events and a relay, setting three ACC record in the process, and was named the ACC Most Valuable Swimmer.

“The conference presents sportsmanship awards for each of its 25 sponsored sports. The concept of these awards was created by the ACC Student Athlete Advisory Committee in an effort to recognize teams who earned the utmost regard from their peers during competition.

The ACC strongly adheres to the principles of integrity and sportsmanship, and supports the total development of the student-athlete and each member institution’s athletics department staff, with the intent of producing enlightened leadership for tomorrow.”