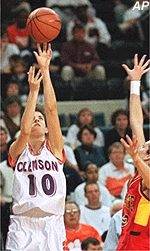 Forns finished the night 7-13 from the field and 4-4 from the three-point line. She also had six rebounds, three steals, and a career-high six assists.

Chrissy Floyd added 12 in Clemson’s win. Florida State was led in scoring by Molly Beal with 12 as she hit four three-point goals. Clemson won the battle of the boards 31-21. Erin Batth had a game-high eight rebounds.

With the win, Clemson improves its record to 13-7 overall, 4-4 in the ACC, Florida State falls to 8-9 overall, 1-6 in league play. Clemson has now won 16 straight games in the series and leads the overall series 18-1.

In the first half, Clemson took a 27-21 lead with 5:07 left to go in the first half as Amirah Leonard hit a field goal from the right. For the remainder of the first half, Florida State went on a 14-4 run and took a 35-31 lead behind Molly Beal who hit three three-point goals in this rally.

Clemson was leading 56-55 with 7:18 left to go in the game. From this point, Clemson went on a 17-6 run to finish the game and win 73-61. In this run, Chrissy Floyd and Amirah Leonard both added four points each. Cossey and Leonard both finished with eight points each.

“I was very pleased with our effort in the second half,” said Clemson Head Coach Jim Davis. “We were our own worst enemy in the first half. The match up zone was good to us and we picked up our transition game at the end. We take pride in our conditioning and we started running and we were not tired at the end. Nuria Forns’ shooting was also a key to our game. She had one of her best overall games of her career. The second half was one of our better halves we have played this season in every phase. Florida State is a team to be dealt with down the stretch. Erin Batth is a tremendous post defender. If she is not the best in America she is one of the best. Joanie Mungro also did a great job for us tonight. We got a lot of help from our bench. Chrissy Floyd and Amirah Leonard both came off the bench and did a wonderful job.”