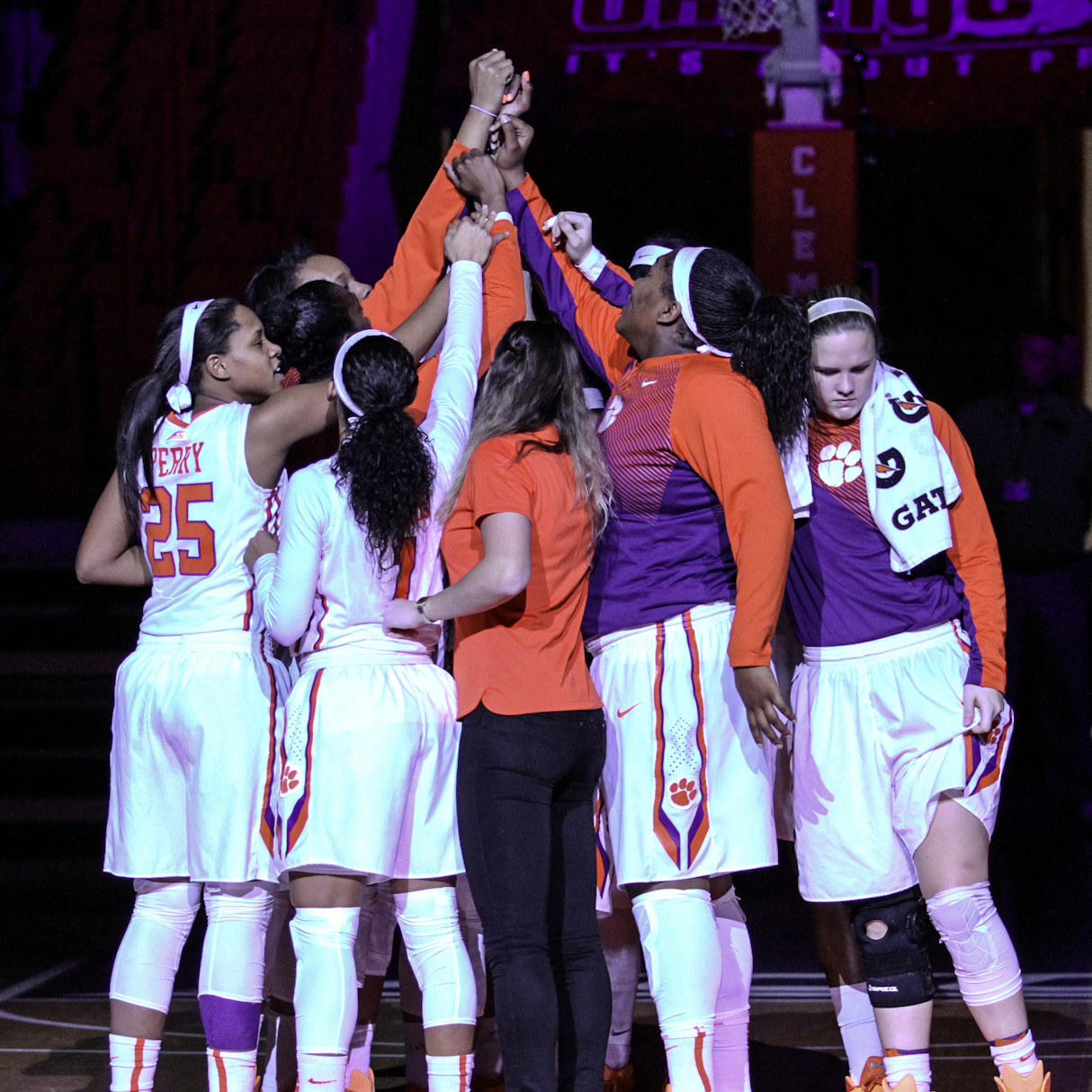 Women?s Hoops Falls to No. 8/9 Louisville

CLEMSON, S.C.– No. 8/9 Louisville staked an early 9-0 lead it wouldn’t surrender as the Cardinals defeated the Lady Tigers, 81-49, in Littlejohn Coliseum Thursday night. The Tigers (9-16, 1-11 ACC) fell to 3-1 against Louisville (21-3, 9-2 ACC) all-time in the teams’ first meeting as ACC foes. Clemson had its highest home attendance of the season as 1,394 fans attended the game, including 765 sorority sisters.

Senior Nikki Dixon achieved a couple of notable milestones in passing Barbara Kennedy-Dixon for first all-time in school history with 417 free throws made. Dixon also moved into sixth in points scored in school history after her 10 point output, her 22nd game in double-figures this season. Dixon is now 49 points away from Lele Hardy in fifth place.

Dixon and Shelbie Davenport paced the Tigers with ten points and Davenport added three assists, tied for her highest total of the season.

The Tigers continue to shoot well from the free throw line, connecting on 8-11 attempts for a .727 clip. Clemson entered the contest shooting .746 from the foul line, second in the ACC. Tigers are still on pace to smash the school record of .714, set during the 1994-1995 season.

Clemson will make the trek to Tallahassee next Thursday to face the seventh-ranked Florida State Seminoles at 7 pm.

Head Coach Audra Smith Quotes“We had a lot of turnovers.  We talked about that in practice as one of the things we couldn’t have in the game is have a lot of turnovers.  Those turnovers led to transition buckets.  Look at their points in the paint and look at their points off of turnovers.  That was a big key. We just weren’t executing.  Our feet were stuck in mud and we’re just trying to get everything we possibly can out of this group.  Unfortunately, it gets hard to be in this situation to face the number eight/nine team in the country, but you have to compete.  I can’t even count the and-ones we gave up, the offensive rebounds they turned into scores; those are the things that we work on every day but have to get better at.”

Individual Notes:Nikki Dixon surpassed Tiger legend Barbara Kennedy-Dixon to move into first place on Clemson’s all time made free throws list. She has made 417 in her career as of tonight.With her 10 points tonight, Dixon has scored in double figures in 11 out of 12 ACC contestsDixon moved into 6th place, passing Karen Ann Jenkins, on Clemson’s all time scoring list with 1,522 career pointsTiffany Lewis has now made a three pointer in 5 straight ACC contestsShelbie Davenport scored 10 points (4-11 fg, 1-5 3fg), hitting double figures for the tenth time in her careerDavenport also recorded three assists, tying her career high

Team Notes:Tonight’s home attendance of 1,394 is the highest of the season for the Tigers; 765 were members of Clemson sororities.Clemson tallied 19 rebounds in the contest, their lowest rebounding total of the seasonThe Tiger bench scored 31 points (average is 26.5 ppg)

There are two things I noticed right away when Louisville walked on the court for pre game warm-ups in Littlejohn Coliseum: the team’s height and its business-like approach. I would have to say both characteristics significantly contributed to the Cardinals’ 81-49 win over Clemson this evening. Louisville’s height and size on the interior proved to simply be too much for the undersized and inexperienced Tiger post players to handle as Louisville scored 38 points in the paint. Furthermore, the Cardinals are ranked 8th in the nation, thus their business-like approach to the game. Louisville knew exactly what they had to do to defeat a young Clemson squad made up primarily of freshmen playing their first long ACC season.

Louisville got out to a quick start, outscoring Clemson 21-5 in the first ten minutes of play. However, I did see some positives from the Tigers, especially in the first half. After the opening Louisville run, the Tigers began to settle into the game and eventually cut the Cardinals’ lead to only 10 points with 2:42 left in the first half. However, Louisville continued to dominate the boards and the paint, a style of play that the Tigers just simply could not slow. Clemson is a guard-heavy team that tends to play better against smaller, more perimeter-oriented opponents. To end on an encouraging note, Clemson did see many different players contribute offensively in tonight’s contest in which all but one of the Tigers put points on the board.

[View the story “Louisville vs Clemson WBB” on Storify]