The Tigers return to the course after their seventh NCAA Tournament appearance, earning a 6-seed in the 2022 Oklahoma State regional. Annabelle Pancake and Savannah Grewal each competed in the USGA Women’s Amateur over the summer.

The Tigers will then travel to Norman, Okla., for the Schooner Classic. Clemson’s best finish in Norman was in 2017, when the Tigers finished at -4 and 2nd place out of 15 teams.

Clemson will play three more tournaments in the fall, including the Battle at the Beach in Cabo San Lucas, Mexico, where the program finished fourth out of 17 teams in 2018, before opening the spring semester at the Moon Golf Invitational in Melbourne, Fla., in late February. Clemson closes out the spring with appearances at the Gator Invitational and the Clover Cup, as last year’s champion, before hosting the Clemson Invitational at The Reserve at Lake Keowee March 24-26. This year’s ACC Championship will be held at Sedgefield Country Club in Greensboro, N.C., April 13-16. 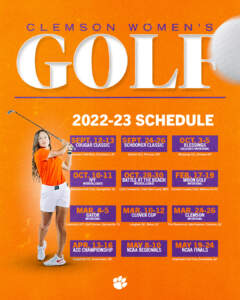