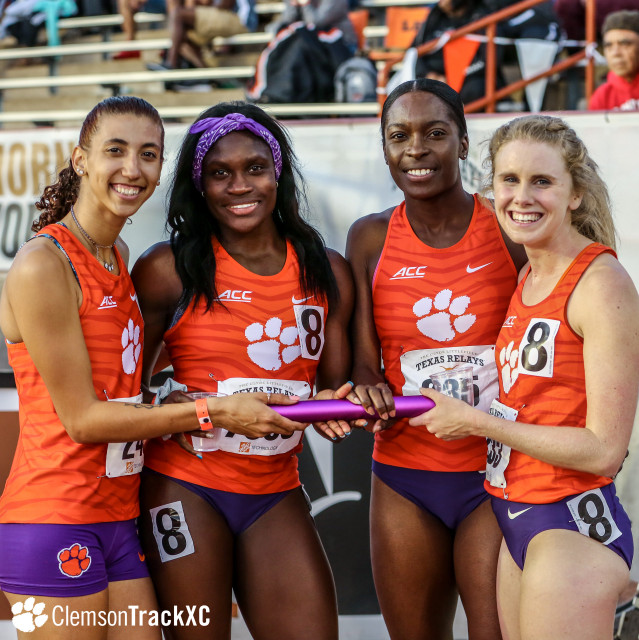 AUSTIN, Texas – On the first straightaway of the final lap of the women’s distance medley relay, Texas A&M’s Sammy Watson pulled just ahead of Clemson senior Grace Barnett. As the two competitors took to the final turn, Barnett began to close the gap on Watson before reclaiming the lead at the final straightaway. Barnett held on to cross the finish line at the 11:08.71 mark with less than one second of separation from Watson to claim back-to-back Texas Relays titles for the women’s DMR team, this year consisting of three new faces: Kamryn McIntosh, Kendra Clarke and Fellan Ferguson.

“With 100 (meters) to go, I knew I still had another gear and was confident that I could make a final push,” said Barnett. “I’m the only member of the (DMR) team last year, so this is very exciting. These girls I got to line up with – I’m very proud to be their teammate and feel very blessed to be a part of that team.”

On the women’s side, junior Markeeta Thomas posted a solid performance in the 400m hurdles finals. Thomas finished in 59.46 seconds to place sixth overall from a field of 77 competitors.

Junior John Lewis ran a split of 1:47.09 in the final leg (800m) of the men’s sprint medley relay to aid Clemson to a third-place finish with a time of 3:18.78. A botched second handoff at the start line set the Tiger men back, but Lewis passed two competitors to earn Clemson a third-place distinction.

The Tigers got off to a hot start Friday by qualifying the women’s 4x100m relay finals in the first collegiate event of the day. Sidney Marshall, Rebekah Smith, Torie Robinson and Ebony Williams collectively conquered one lap in 45.12 seconds. To win the first heat of the day, while placing fifth overall. Marshall, Smith, Robinson and Williams were less than 0.20 seconds shy of their season-best time (44.96), which they achieved at last weekend’s UNF Spring Break Invite.

Williams then advanced to Saturday’s finals in the 100m hurdles after placing third in the first heat. The sophomore posted her all-conditions season best, 13.52 seconds (2.9w) to secure the ninth and final spot in Saturday’s final.

In the men’s race, Kirk Lewis won the second heat for the Tigers, also with an all-conditions best of 14.04 seconds, but missed the finals by one spot after finishing 10th overall. Despite winning his heat, the senior finished just 0.01 seconds shy of the ninth-place finisher.

Senior Torie Robinson (11.31, 3.4w) tied her all-conditions best, which she ran in last year’s ACC Outdoor finals, placing third in the third heat of the women’s 100m dash. The senior claimed seventh place overall in Friday’s prelim. Sophomore Rebekah Smith (11.37, 1.7w) missed the cut for finals, despite running her second-best career time, by one spot with a 10th-place finish.

In the field, sophomore Grant Voeks had a nice outing the men’s shot put (Section B) with a best heave of 16.17m. His first throw of the day, 15.90m, qualified him for three additional throws in which he notched his season best on his sixth and final throw of the event.

Clemson returns to the track Saturday, beginning for the women’s 4x800m relay at 11:40 a.m. (ET) and will air on Longhorn Network. Live results can be accessed via clemsontigers.com.