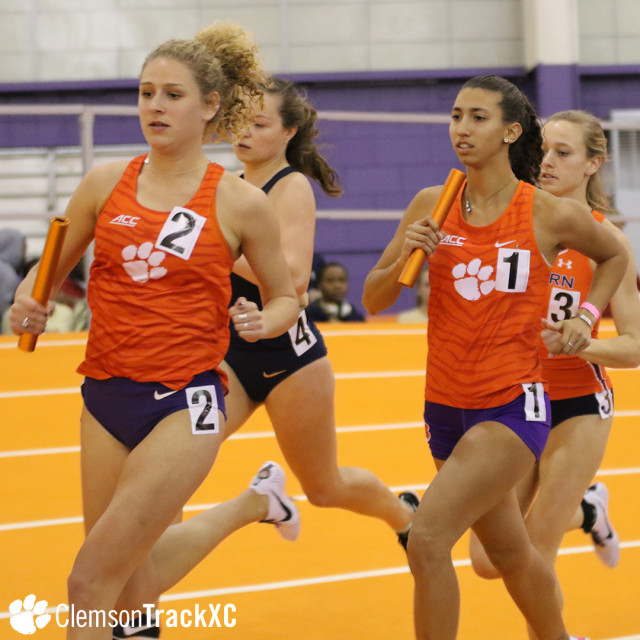 CLEMSON, S.C. – The Tigers’ track & field team wrapped up day one of the annual Bob Pollock Invitational Friday at the Clemson Indoor Track & Field Complex. The meet was highlighted by first-place wins by the Clemson women’s distance medley relay team, which also set the facility record in the event, and junior long jumper Chris McBride.

In the final women’s event of the day, the Clemson DMR team broke the facility record of 11:15.57, which was set by Duke in 2014, by just 0.01 seconds. The Tigers’ A-Team consisted of Kamryn McIntosh, Olivia James, Fellan Ferguson and Grace Barnett, respectively. Their time of 11:15.56 currently ranks first in the ACC and second in the NCAA.

McBride took home then men’s long jump title with a best leap of 7.57m, just .01m shy of his season best, which he achieved at the Orange & Purple Classic on Jan 6. Entering today’s meet, McBride ranked first in the ACC and tied for 16th in the NCAA.

In the men’s 60m hurdles, senior Kirk Lewis placed second with a blistering time of 7.76 seconds to set a new personal record. Lewis held the ACC’s No. 3 spot in the event entering today’s meet. His time is currently good eighth in the NCAA.

Senior Torie Robinson ran her best time of the season in today’s 60m dash finals after tying her career best of 7.27 seconds. Her mark of 7.27 is good for third-best in school history, ranks second in ACC, and fifth in the NCAA entering today’s meet.

In the throws department, sophomore Grant Voeks threw a personal-best 16.00m to place sixth in the men’s shot put, which puts him ninth in the ACC entering this weekend’s meet. Tomorrow, Danielle Borriello and Joe Cline are set to compete in the cage for the Tigers in the weight throw.

The Bob Pollock Invitational resumes Saturday (Jan. 27), beginning with the women’s weight throw at 11 a.m. The first track event commences at noon with the women’s 600m run. The meet concludes with the men’s 4x400m relay, slated for 3 p.m. Live results for Saturday’s action can be accessed on clemsontigers.com.