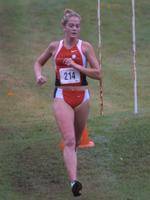 The Clemson women’s cross country team will compete in the Furman Invitational on Saturday in Greenville, SC. The women’s 5K event will start at approximately 10:45 AM and will feature 26 collegiate teams. The event will mark the fourth this season for the women’s team, who looks to improve upon their fifth-place finish at the FSU Invitational last month.

Jennifer Barton has led the way so far this season for the women’s team. She has posted two top 10 finishes in three events, including a first-place finish in the season-opening Gamecock Invitational. She was also the S.C. Collegiate Champion by virtue of her eighth-place overall finish in the Clemson Invitational on September 10.

Casey Phillips has been the Lady Tigers’ next best runner this season. The senior from Greenville has posted two top 20 finishes in three events and has a season-best time of 18:55, which she achieved at the Clemson Invitational.

Ashley Robinson has been the top newcomer on the 2005 squad, as she earned all-state honors in the Clemson Invitational and finished 39th overall at the FSU Invitational last month. Also impressing among the newcomers have been Sunday Ford and Candice Johnson.

The Lady Tigers will nearly take their full roster to the Furman Invitational on Saturday.