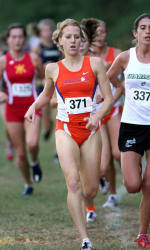 Clemson, SC – The women’s cross country team will travel to Louisville, KY this weekend to compete at the NCAA Southeast Region Championships. The meet, which will cover 6000 meters in distance, will be held for the second straight year at E.P. “Tom” Sawyer Park. The event gets underway at 12:15 PM Saturday.

Clemson was 22nd in the team race a year ago and 17th at the 2005 meet in Greenville, NC. The Lady Tiger program finished in the top 10 in consecutive years at the NCAA Southeast Regionals in 1998 and 1999.

Seven student-athletes will travel this weekend for Marcia Noad and Gordon Thomson’s squad. Leading the way is freshman Jenna Baker, who performed well in her first-ever ACC meet two weeks ago. She came away with the team’s top finish in 25th place, which was fourth-best among league freshmen. She posted a time of 22:14.5 at ACCs in a 6K competition.

Laura Laughlin continues to be a steady influence on the team. She has scored in each meet this season and is coming off a 45th-place finish at the ACC Championships. She was the team’s top finisher at regionals last season.

Stephanie Buffo and Abby Iselborn have also performed well this season as first-year freshmen. Buffo, a local product from Spartanburg, SC, has scored in each of the last four meets for Clemson. She was seventh at the ECU Pirate Invitational on September 29. Iselborn was 56th overall at the ACC meet two weeks ago, and she posted a time of 23:16.8 at the meet in Charlottesville.

Lisa Brown, Joanie Castagno, and Sunday Ford will also make the trip this weekend to Kentucky.