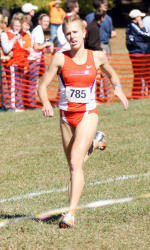 Clemson, SC – The women’s cross country schedule for 2007 was announced Thursday by Gordon Thomson, assistant coach who oversees the distance program. The team will have eight definite dates in which it will compete this fall.

The season gets underway on Friday, August 31 at the Gamecock Invitational in Columbia, SC. Clemson competed in this event last season and finished fourth in the team standings. The following weekend, September 7th, the Lady Tigers will head to UNC Wilmington for the Seahawk Invitational.

“We start out our season with competition three weeks in a row,” Thomson explained. “The first two meets we will just be starting to get going. The third meet at Vanderbilt will be a good measure of how good we can be.”

The Vanderbilt Invitational is scheduled for Saturday, September 15 in Nashville. The team will then get a week to rest before heading to Greenville, NC for the East Carolina Invitational on September 29. Following another off-week, Clemson will be competing in a pair of meets on the 12th and 13th of October. The Blue Ridge Open at Appalachian State is set for Friday the 12th, while the Furman Invitational will be held on the 13th.

“Our schedule prior to the ACC Championships is a good mix of flat and fast courses and hilly courses,” Thomson said. “One thing is for certain, the ACC meet at Charlottesville is both fast and hilly.”

As Thomson stated, the team will return to Charlottesville, VA for the second straight year for the conference meet. Clemson competed at the Panorama Farms course twice last season, so familiarity for the returning runners should be key to the team’s success.

The NCAA Southeast Region Championships will also be held at a familiar site. The event will be held on November 10 again this season in Louisville, KY. The NCAA Championships are scheduled for November 19 in Terre Haute, IN.

“Our 2007 distance squad includes seven returning competitors and eight incoming freshman,” Thomson said. “We will be young, as there aren’t any seniors on the team. Everyone will have a chance to prove themselves, but it will certainly be exciting because of the large number of newcomers.”

Headlining the seven returning runners will be sophomore Laura Laughlin, who was competitive in her first season with the program. The Aiken, SC native was the team’s top finisher in several events in 2006, including the Southeast Region Championships.

The class of newcomers includes a set of twins from Delaware in Annie and Joanie Castagno. The duo helped Tatnall High School to a state championship in 2006, with Joanie finishing third in the individual race. Also joining the squad this season are Stephanie Buffo, a three-time All-State cross country performer in South Carolina, and Abigail Iselborn, a solid distance performer from Portland, ME.