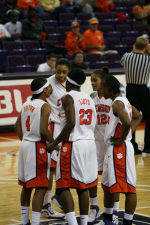 CLEMSON, SC – The Clemson women’s basketball team (9-7, 1-0 ACC), which is coming off of a road victory over Wake Forest on Friday night, will play host to Georgia Tech on Sunday afternoon in its ACC home opener. The contet is scheduled to begin at 2:00 pm from Littlejohn Coliseum. Fans not in attendance will be able to follow the action in any one of three ways. The game will be broadcast on the airwaves on the Clemson Tiger Sports Network with Don Munson calling the plays and www.clemsontigers.com.

Members of the team will also be signing autographs on the court following the conclusion of the game.

Junior D’Lesha Lloyd boasts a team-best 15.5 scoring average and is riding a 12-game double-figure scoring streak. The Columbia, SC native is also leading the Lady Tigers with a 7.1 rebounds per game average. Fellow junior Tasha Taylor also owns a double-figure scoring average at 11.9 points per game, while freshman Lele Hardy ranks third on the team in scoring with 11.1 ppg and second in rebounding with 7.0 rpg. Hardy is also atop the ACC with a 3.89 steals per game average as she has collected 62 in Clemson’s 16 games this season.

Scouting the Yellow Jackets Georgia Tech enters Sunday’s ACC match-up with a 9-5 overall record and an 0-1 ledger against conference opponents after falling to #1-ranked North Carolina in its league opener.

Stephanie Higgs leads the Yellow Jackets with a 16.9 scoring average, a figure that ranks fourth in the ACC. Higgs is shooting a .447 percentage from the field while hitting 14-37 three-point shots. Chioma Nnamaka leads the team from behind the arc as she has knocked down 40 three-pointers in 96 attempts. Nnamaka ranks second on the team in scoring with a 13.9 average, while Janie Mitchell owns a team best 6.7 rebounds per game average.

Overall, Georgia Tech boasts a 73.4 scoring average while holding their opponents to just 57.5 points per game. The Yellow Jackest also hold a 42.4 to 33.4 rebounding edge and are shooting 42.6% from the field.

Clemson vs. Georgia Tech, The Series Today’s game featuring Clemson and Georgia Tech will be the 56th meeting in history between the two schools, dating back to the 1979-80 season. The Lady Tigers hold a 41-14 all-time advantage over the Yellow Jackets, including a 22-4 record in games played in Clemson, SC. Last season, the teams split their two contests with each winning on its home court.

Veterans Vs. Georgia Tech All six of the Clemson’s returning letterwinners have seen action in multiple games against Georgia Tech. D’Lesha Lloyd is averaging 9.8 points per game against the Yellow Jackets after posting 19 in the most recent match-up. Tasha Taylor has also played well against the team from her home state, averaging 7.3 points, 1.8 rebounds and 6.0 assists.