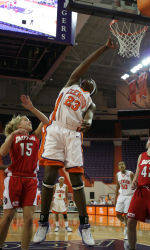 CLEMSON, SC – The Clemson women’s basketball team will welcome second-ranked (AP/USA Today) North Carolina to Littlejohn Coliseum on Thursday night. The Lady Tigers and Tar Heels will take to the court at 7:00 pm. Fans in the upstate will be able to follow the action on the airwaves with Dan Scott and www.clemsontigers.com).

D’Lesha Lloyd will look to extend her double-figure scoring streak to 14 straight on Thursday night after posting 14 points against the Tar Heels in Chapel Hill, NC last season. She currently boasts a 15.6 scoring average which ranks seventh in the ACC while also leading the Lady Tigers with 7.1 rebounds per game. Freshman Lele Hardy is atop the conference with a 3.71 steals per game average, which also ranks seventh in the nation. She is second on the team for both scoring and rebounding with 11.6 points and 6.9 rebounds per game.

Clemson vs. North Carolina, The Series The contest between Clemson and North Carolina will be the 69th meeting in the series, dating back to the 1975-76 season. The Tar Heels hold a 42-26 all-time advantage over the Lady Tigers. However, Clemson leads by a 14-11 margin in games played on its home court. Last season, North Carolina defeated the Lady Tigers, 102-61, in Chapel Hill, NC.

Scouting the Tar Heels North Carolina enters Thursday night’s game as one of three undefeated teams in women’s college basketball, with all three hailing from the Atlantic Coast Conference. The Tar Heels boast an 18-0 overall record, a 3-0 mark in league play and the #2 ranking in both the AP and USA Today polls. They lead the nation in scoring (90.6 ppg), scoring margin (41.5) and steals per game (17.5).

All five North Carolina starters average in double figures with senior point guard Ivory Latta leading the way with a 14.9 figure. Latta has hit 48-of-117 three-point shots for a 41.0% shooting percentage from long range.

Camille Little averages 13.9 points per game, while Erlana Larkins owns a 12.5 scoring average to go along with her team-best 9.1 rebounds per game.

The Tar Heels are allowing their opponents just 49.1 points per game while out-rebounding them by a 16.1 margin.

Adrianne Bradshaw – has totaled six points and four rebounds in 21 minutes of action in two games. Moreemi Davis – played just 14 minutes against the Tar Heels as a freshman …had five points and six rebounds in the game. D’Lesha Lloyd – led Clemson in scoring in last season’s contest with 14 points …had 15 against UNC as a freshman in 2005-06 …has also collected 10 rebounds and six steals verse the Tar Heels while hitting four three-pointers. Tasha Taylor – is averaging 7.0 assists per game in two contests against UNC …had seven of eight total points in last season’s match-up and has totaled seven steals verse the Tar Heels. Carrie Whitehurst – has played 34 minutes in four games against UNC with eight total points and four rebounds. Susan Yenser – played just six minutes in last season’s contest.