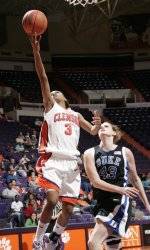 CLEMSON, SC – The Clemson women’s basketball team will hold an Orange & White scrimmage on Monday afternoon. The team will play from 2:30 pm – 5:00 pm at Littlejohn Coliseum. The event is free of admission and open to the public.

Season tickets for the Lady Tigers’ 15-game home schedule are available at the Clemson athletic ticket office. To order, call 1-800-CLEMSON or go online at www.clemsontigers.com.

Head Coach Cristy McKinney returns six letterwinners for the 2006-07 season, while also gaining the services of red-shirt freshman Christy Brown. Tasha Taylor returns as the lone starter from the 2005-06 season, as she started all 29 games at the point guard position. Susan Yenser also returns in the backcourt, while Brown will see her first on-court action at Clemson. In addition, McKinney has brought in rookie guards Lele Hardy and Morganne Campbell.

Junior Adrianne Bradshaw will assume the starting center role this season, while red-shirt sophomore Moreemi Davis will earn minutes at the five position as well as at the four. Clemson returners Carrie Whitehurst and D’Lesha Lloyd will make the transition to post players, figuring to split duties at the power forward.

Clemson will play Anderson University in an exhibition contest on Tuesday, Nov. 7 and will then open its 2006-07 season on Friday, Nov. 10 against Arkansas.