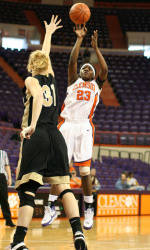 Women’s Basketball To Face #3 North Carolina On The Road

CLEMSON, SC – The Clemson women’s basketball team will be in action on Thursday night in Chapel Hill, NC as the Lady Tigers will take on the third-ranked (Ap/USA Today) Tar Heels at the Carmichael Auditorium. The Lady Tigers (10-13, 2-5 ACC) are coming off of a home win over Wake Forest, while North Carolina improved to 20-2 overall record and 7-0 in the conference after defeating Duke on Monday night.

Scouting The Tar Heels North Carolina enters Thursday’s match-up as the #3-ranked team in both the AP and coaches polls with a 20-2 overall record. The Tar Heels have suffered their two losses on the road against #1 Connecticut and #2 Tennessee this season. They are a perfect 7-0 in conference play, most recently defeating Duke, 93-76, at Cameron Indoor Stadium.

North Carolina is the nation’s most potent offense, averaging 89.3 points per game, while defeating the opposition by over 26 points per game. The scoring margin ranks second in the country, while the Tar Heels’ 7.4 blocks per game and 14.6 steals per game lead the country, through Feb. 3 games.

Five players average in double figures, led by Rashanda McCants’ 16.0 figure. Erlana Larkins leads the team on the boards with 8.7 rebounds per game to complement her 12.0 scoring average. LaToya Pringle and Jessica Breland have combined for 106 blocked shots this season to help North Carolina to the 7.4 figure. On another note, Head Coach Sylvia Hatchell will be going for her 500th win at Carolina.

Christy Brown – tallied seven assists but just one field goal in 2007 match-up with the Tar HeelsMorganne Campbell – scored seven points in only six minutes of action last season against North Carolina Moreemi Davis – has totaled nine points and nine rebounds in 25 total minutes of play Lele Hardy – was just 2-of-14 from the field for six points last season versus the Tar Heels, but had nine rebounds and five assists D’Lesha Lloyd – averaging 13.7 points and 5.3 rebounds in three career games against North Carolina