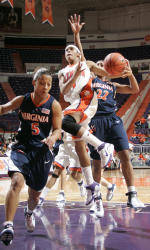 CLEMSON, SC – The 2007 ACC Women’s Basketball Tournament is set to tip-off on Thursday, Mar. 1 and will conclude with the championship game on Sunday, Mar. 4. The Lady Tigers, seeded ninth, will begin play against #8 seed Virginia at 3:00 pm on the opening day of the event, which is held at the Greensboro Coliseum in Greensboro, NC. The game will be broadcast on the ACC’s Regional Network (FSN South, ComCast Sports Network, FSN Florida and New England Sports Network), with Mike Hogewood and Charlene Curtis. Fans can also follow the action on the airwaves on the Clemson Tiger Sports Network, as Don Munson will call the plays and www.clemsontigers.com.

Junior D’Lesha Lloyd owns a team-best 14.1 scoring average while also pulling down 6.4 rebounds per game. Her classmate Tasha Taylor has been averaging 12.9 points in ACC action this season with a 12.2 overall scoring figure. Taylor is currently listed fifth in the Clemson record books with a 3.91 career assist per game average and ranks 10th all-time with 332 assists in her three years in Tigertown.

Freshman Lele Hardy, a member of the 2007 ACC All-Freshman team, ranks eighth in the nation with a 3.3 steals per game average. The Spartanburg, SC native set the school freshman record for steals in a single season with 95 so far in 2006-07. The statistic also ties her for second overall in Clemson history and fourth in ACC freshman history. Hardy leads the Lady Tigers with a 7.0 rebounding average while also posting 11.6 points per game. Fellow all-freshman honoree Christy Brown boasts a 4.66 assist per game average that ranks fourth in the conference.

Scouting the Cavaliers Virginia completed its 2006-07 regular seaon with a 16-13 overall record and a 5-9 mark in ACC action to finish eighth in the conference. The Cavaliers won their regular season finale over Clemson, 86-85.

Lyndra Littles leads the squad in both scoring and rebounding wtih 16.8 points and 8.9 rebounds per game. The 6’1″ Littles has made a team-high 179 field goals while also converting 129-of-168 free throws, including a 9-for-9 performance against the Lady Tigers on Sunday afternoon.

Monica Wright, who was selected as the ACC Freshman-of-the-Year on Tuesday, ranks second on the team with a 14.9 scoring average, which also leads all ACC rookies, and is pulling down 6.0 rebounds per game from her guard position.

Overall, Virginia is averaging 72.4 points per game with a 39.9 rebounding figure. The Cavs are shooting 42.2% from the field with a 72.6-percentage from the charity stripe.

Clemson’s ACC Tournament History The Clemson women’s basketball team owns a 27-26 overall record in the 30-year history of the ACC Tournament. The Lady Tigers have won the championship twice and have advanced to final game on six occasions. Clemson has reached the semifinal round 17 times in history.

Last season, the Lady Tigers fell to NC State, 67-53, in the opening round. Their last victory in the tournament was a 63-61 decision over Maryland in 2003.

When Facing Virginia In The Tournament The Lady Tigers and Cavaliers have met eight times in the ACC Tournament with Clemson holding a 5-3 edge in those contests. However, this will be their first match-up in Greensboro, NC.

The teams last met in the semifinals of the 1997 event in Charlotte, NC as the Lady Tigers posted a 77-75 overtime victory. Virginia has been the higher seed in six of the eight games, including the 1997 meeting, but Clemson has upset the Cavaliers three times.

Veterans At The ACC Tournament Adrianne Bradshaw – played 10 minutes against Maryland in 2005 with one rebound …scored eight points on 4-of-6 shooting in 2006 match-up with NC State. Moreemi Davis – posted eight points with three rebounds in just nine minutes of action against Maryland in 2005 tournament. D’Lesha Lloyd – played 30 minutes in 2005 contest verse Maryland …led team with 11 points against NC State in 2006 tournament …also had four rebounds in the game. Tasha Taylor – tallied six points, three rebounds and three assists against Maryland in 2005 …played 38 minutes in 2006 tournament verse NC State with eight points, three rebounds and two assists. Carrie Whitehurst – has seen just 32 total minutes of play in three career ACC Tournament game …has six points and six rebounds with one steal in the annual event. Susan Yenser – played just eight minutes in last season’s tournament game against NC State as she was suffering from a stress fracture.