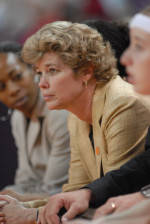 CLEMSON, SC – The Clemson women’s basketball team has signed four players to National Letters of Intent, as announced by Head Coach Cristy McKinney on Friday morning. The 2008-09 signing class includes a trio of post players from Georgia in Lindsey Mason, Shaniqua Pauldo and Lindsay Welker, while wing Morgan McMinn is a native of North Carolina.

“We are very excited about our 2008-09 recruiting class,” said McKinney. “We met a true need in our program by signing two true post players and a power/small forward combo player. We need the size that these players will provide on the court. We also added depth to our perimeter with another quality wing.”

Mason is a 6’4″ dual-sport athlete from Woodstock, GA who holds Etowah High School single-season and career records for blocks in both volleyball and basketball. She averaged 11.0 rebounds and 18.0 points per game last season, hitting the 1,000-point milestone, while also posting 4.7 blocks per game. Mason led her 2005 team to the state championships and her 2006 squad reached the Elite Eight of the state tournament. She was named first-team all-county that season and repeated as a first-team honoree in 2007.

“Lindsey Mason is a big, mobile post with a lot of skill and a tremendous upside,” McKinney said. “She is already a very good shot blocker, which we don’t have at this time. She will also provide additional scoring in the low block for us.”

A 5-11 wing player from Hendersonville, NC, McMinn was an Honorable Mention All-America selection in 2007 by Street and Smith and The Sporting News. She averaged a double-double as a junior at North Hendersonville High School with 24.0 points and 10.9 rebounds per game. McMinn holds school records for points and rebounds in a career and enters her senior season just one blocked shot shy of the career record. She has been a three-time all-conference selection and earned an invitation to the 2007 Adidas All-American Camp.

“Morgan can play either wing position. She is a strong, athletic wing with good skills. She will challenge the players in our program for playing time as a freshman.”

Pauldo, who will play for Luella (GA) High School this season, led Westside-Macon High School to the semifinals of the state tournament and a 22-8 record as a junior in 2006-07. She averaged 18.4 points and 8.23 rebounds per game with 46 blocked shots that season to earn all-state recognition. The 6-3 center was also a member of the 2005-06 Westside team that reached the elite eight of the state tournament and finished with a 21-10 record.

“Shaniqua is another true low post player who can step out and shoot with a little range. She has good size and mobility and brings much needed strength to the low block.”

Hailing from Tifton, GA, Welker is a 6-2 forward and a three-year letterwinner in both basketball and tennis at Tift County High School. She was a first-team all-region, all-Tift area selection in 2006 and 2007 and was named to the GACA All-State First Team in 2007.

“Lindsay Welker is currently a power forward, but in time she will also be able to play the small forward position as she shoots the three really well,” commented McKinney. “She plays with a visible passion for the game and will add much needed intensity and toughness to our team.”