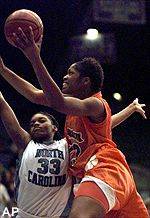 CHAPEL HILL, N.C. (AP) – Krystal Scott scored all of her 16 points in the second half, helping Clemson upset No. 15 North Carolina 60-59 Monday night for its first Atlantic Coast Conference victory.

The Tar Heels have lost three straight for the first time since 1995-96.

North Carolina (9-5, 1-3) trailed by as many as 12 points early in the second half before pulling within 60-56 on Coretta Brown’s jumper with 24 seconds to play.

Although Clemson missed four free throws in the last 22 seconds. North Carolina was able to score only on Juana Brown’s 3-pointer at the horn.

North Carolina Coach Sylvia Hatchell announced Sunday that Teasley was taking “an indefinite leave of absence” from the team for unspecified reasons. Hatchell refused Monday to give any details about Teasley’s situation.

Nuria Forns and Floyd had seven points apiece in the first half to pace Clemson to a 23-21 lead at the break.