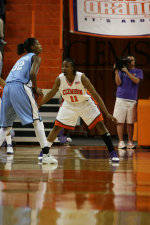 CLEMSON, SC – The Clemson women’s basketball team will return to Littlejohn Coliseum on Sunday afternoon, following a 17-day absence. The Lady Tigers (10-14, 2-7 ACC) will play host to Virginia Tech (16-10, 5-5 ACC) at 2:00 pm. Fans can follow the action via the airwaves with the Clemson Tiger Sports Network or via the Internet on www.clemsontigers.com. Don Munson will call the play-by-play on the radio, while Kanetra Queen will provide color commentary.

Freshman Lele Hardy needs just one steal against the Hokies to enter the Clemson record books for a single season. The Spartanburg High School alumna has recorded 75 so far this season, while 76 steals would tie her for fifth place in school history. She also leads the Lady Tigers in rebounding with a 6.9 per game figure and ranks third on the team in scoring with a 10.8 average.

Tasha Taylor has been a scoring threat this season, especially during conference action. The junior from Columbus, GA is leading the Clemson squad with a 13.6 points per game average since the ACC schedule began, bringing her season average to a 12.3 figure. Overall, D’Lesha Lloyd boasts a team-high 14.4 scoring average and ranks second on the team in rebounding with a 6.8 average.

Clemson vs. Virginia Tech, The Series This afternoon’s contest featuring the Clemson Lady Tigers and Virginia Tech Hokies will be just the seventh meeting in history between the two teams. Although the series score is tied at three wins apiece, Clemson holds a 2-1 edge in games played on its home court. The Lady Tigers won the first three contests of the series, but the Hokies have claimed the last three, including a 82-70 victory last season in Blacksburg, VA.

Scouting the Hokies Virginia Tech enters Sunday afternoon’s match-up with a 16-10 overall record and an even 5-5 mark against ACC competition. The Hokies have won five of their last seven games, with the two losses suffered against #1 Duke and #6 Maryland.

Overall, the Hokies are averaging 65.5 points per game and are out-rebounding the opponents by a 3.8 margin. They own a .434 shooting percentage while holding their opposition to just a .396 figure.