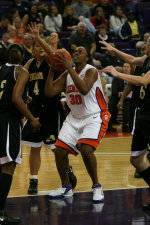 CLEMSON, SC – The Lady Tiger basketball team recorded the biggest improvement by any Clemson athletic team in 13 years during the first semester when it recorded a team GPA of 2.77. Cristy McKinney’s program improved its team GPA by 0.70 over the previous semester, the best improvement for any Clemson program since the women’s tennis program made a 0.70 improvement in 1994.

The Lady Tigers’ 2.77 figure was their highest academic performance in 13 semesters and their best fall semester since 1997.

“We are working hard to improve our program in all areas – on the court, off the court and in the classroom,” Head Coach Cristy McKinney’s said. “The team has done a good job of buying into our system and I am proud of our players.”

Five Clemson players were named to the Dean’s List for the semester, including starting center Moreemi Davis and senior Carrie Whitehurst. The two recently led the Lady Tigers to a road victory over Miami as Davis posted her first career double-double and Whitehurst set a career-high with five three-pointers in the game. Alexis Auffray, Adrianne Bradshaw and Susan Yenser also earned GPA’s of at least 3.5 last semester.