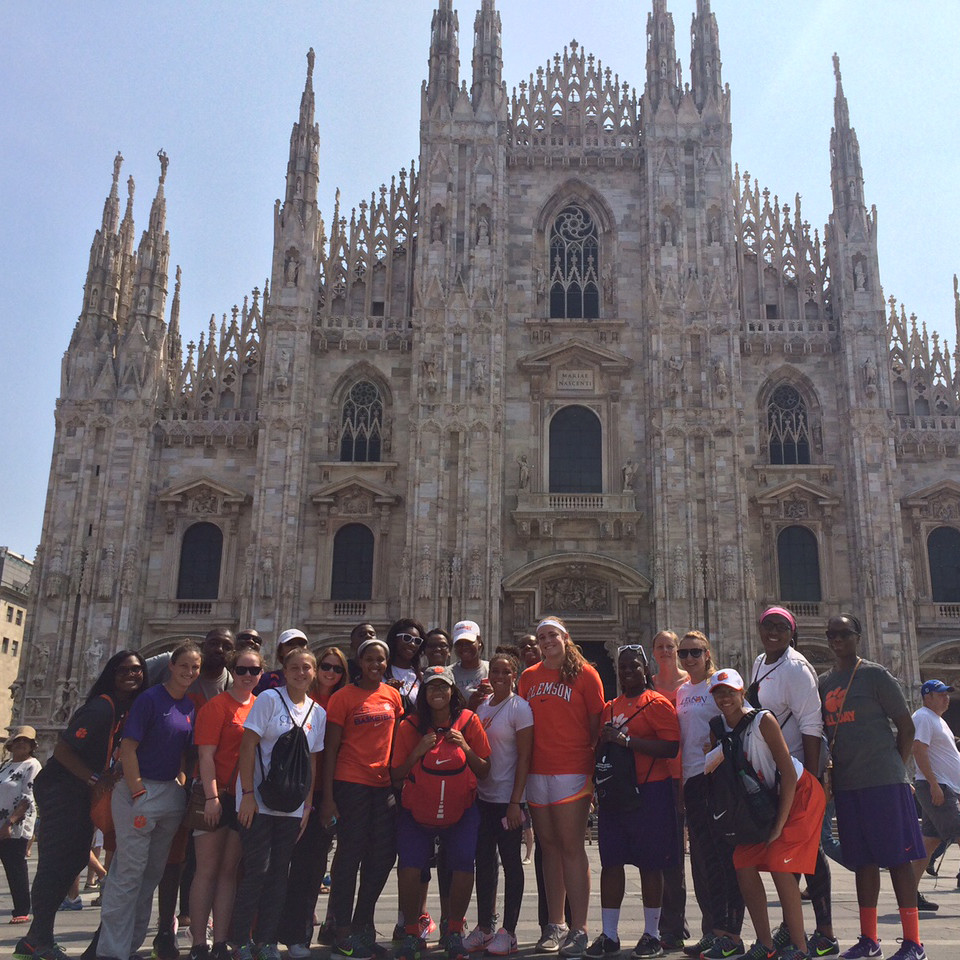 Day 1 of the Clemson women’s basketball team’s Italy trip was nearly 48 hours long, but because there was little sleep involved, we’re going to consider the entire time period as one day! It started in Clemson, S.C. at 7 a.m. on Tuesday, Aug. 4, where the team and staff boarded a bus to Hartsfield-Jackson Airport in Atlanta. From Atlanta, the Tigers flew to John F. Kennedy Airport in New York City. After a layover at JFK, the group boarded the overnight flight to Milan, Italy.

It was 9 a.m. local time (there’s a six-hour time difference between South Carolina and Italy), when the Tigers arrived in Milan and, while everyone was tired, there was still noticeable excitement in the air to begin the first day of sightseeing. After a bus ride from the airport into the city, the team was led on a walking tour of Milan, which included visits to Castello Sforzesco, the Galleria de Milano and the Duomo de Milano, the fifth-largest cathedral in the world, and second largest in Italy. (We’ll also be seeing the largest cathedral, St. Peter’s Basilica, when we visit Rome and the Vatican later this trip.)

After the walking tour ended, and because we were in the fashion capital of the world, the team was given time to shop and eat lunch before boarding the bus for an hour-long ride to Lake Como.

There were a few hours of free time in Lake Como before dinner. Some people used the time to catch up on some much needed sleep, while others continued to explore the city. A few groups took the Funicolare Como-Brunate, a railway that runs up and down the side of the mountain connecting Como to the village of Brunate, displaying gorgeous views of the lake. One of those groups, which included two players, Ivy Atkism and Victoria Cardaci, along with some of the support staff, even made the extra 2.5 km walk to reach the lighthouse of San Maurizio.The rest of the players and staff were highly impressed by this group’s energy level, especially after such a long day, and so little sleep!

The evening ended with a delicious traditional Italian meal at L’Orologio in Lake Como. Taking the time to sit down and talk about all of the amazing things that we did and saw was the perfect way to end the first day of our Italian adventure.

Be sure to follow us on Instagram (@culadytigers) throughout the day every day for the most up-to-date information about our trip. We’ll also do our best to recap each day on ClemsonTigers.com, wi-fi permitting!