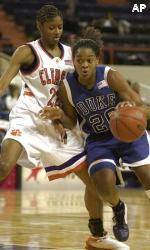 Alana Beard scored 21 points to lead No. 2 Duke to a 61-49 win over Clemson on Thursday night. Duke (21-1, 9-0 Atlantic Coast Conference) was playing in its first game since losing its undefeated season and No. 1 ranking to UConn this past Saturday night 77-65.

“Every time this team has ever been tested, or had to deal with adversity, we’ve shown great character,” Goestenkors said. “The Connecticut game was some adversity for us. And I think we did the best thing we could, which is learn from that experience and show the character that we have and become a better team.”

Beard didn’t expect her teammates to slump after the year’s first loss, either. Instead, she said the Blue Devils had their three best, most intense practices.

“Everyone came back focused and ready to play,” she said. “We showed the fire that we needed to come back strong on the court.”

This may not be the prettiest game Duke has played this year – the Blue Devils shot under 40 percent for the third straight game – but it was still their 33rd win in a row against ACC teams and fifth straight over the Lady Tigers (11-10, 3-7).

Beard, as she has all season, had a big hand in this one. Besides her offense, she forced Clemson’s top scorer, Chrissy Floyd, into one of her worst games.

Floyd, who came in averaging almost 16 points, hit her first two shots, then missed her next nine attempts and finished with 11 points on 4-of-14 shooting.

“She is so strong coming off screens and curls,” Beard said of Floyd. “We wanted to limit her touches and keep her from scoring.”

The Blue Devils took a while to get going. They trailed the Lady Tigers 10-5 to start, then traded the lead with them seven times in the next six minutes.

Beard’s three-point play gave Duke the lead for good at 22-21. She followed that with two fouls shots and a fast-break layup to extend the lead.

Beard had a free throw and a basket to start the second half and put Duke ahead 39-27. She had another jumper and a three-point play to extend the lead to 52-34 with 10:53 left.

Duke managed only three free throws in the next eight minutes, and Clemson cut the lead to 55-47 on Amanda White’s foul shots. But Beard restored control for the Blue Devils with four straight from the free-throw line in the last two minutes.

Duke relied on its tough defense to bail it out on a poor offensive night.

The Blue Devils got 26 turnovers from the Lady Tigers and held them to 10-of-36 shooting on 2-point field goals.

“I don’t know,” Clemson coach Jim Davis said. “We just struggle so badly offensively. We’ve tried everything under the sun to get better.”

That was going to be difficult against Duke under any circumstances. With the Blue Devils trying to recover from their first loss of the season and Beard smothering Floyd on defense, it was next to impossible for the Lady Tigers.

“We didn’t want to get down on ourselves,” Beard said. “So we made sure we were going to come out and play hard.”