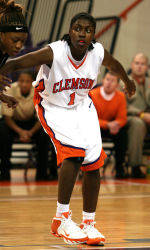 WASHINGTON, D.C. – The Clemson women’s basketball team fell to the Georgetown Hoyas, 69-56, on Friday night at the McDonough Arena in Washington, D.C. The loss dropped the Lady Tigers to 6-7 on the year, while the Hoyas improved to 7-5.

Turnovers and fouls hurt the Lady Tigers hurt the Clemson effort as Georgetown converted 25 of 30 free throws and scored 23 points off of 24 Lady Tiger turnovers.

Maxienne White was the Lady Tigers’ top scorer with 12 points in the contest, while Amanda Frist added 10 in the losing effort. Tasha Taylor bettered her ACC-leading assist mark with eight on Friday.

The Hoyas had three players score in double figures as Kieraah Marlow held game-high honors with 23. Bethany LeSueur had 14 while Katrina Wheeler contributed 12.

Georgetown jumped out to an early lead in the opening half, bettering the Lady Tigers by as many as 15 in the period. The Hoyas made only one more field goal than Clemson, but they converted 11 of 12 free throws and took a 37-25 advantage into the break. Adrianne Bradshaw scored six points off the bench for the Lady Tigers in the period, while Susan Yenser contributed five in a reserve role as well.

Georgetown increased its lead back to 15 at the 16:04 mark in the second half before Clemson scored 10 unanswered points to come within five at 45-40 with 12:51 remaining. White had two baskets during the stretch while Julie Talley also made two field goals and recorded a steal.

The Hoyas went back up by 10 points with just under eight minutes left in the period and held onto their lead to claim the 69-56 victory.

The Lady Tigers will welcome in-state rival South Carolina to Littlejohn Coliseum on Monday, Jan. 2. Clemson and the Gamecocks will take to the court at 7:00 PM.